Yelan Vs Xiao Vs Itto Or Kazuha? | Which Character Should You Pull?

Check out Which Character Should You Pull? Yelan Vs Xiao Vs Itto Or Kazuha in Genshin Impact! 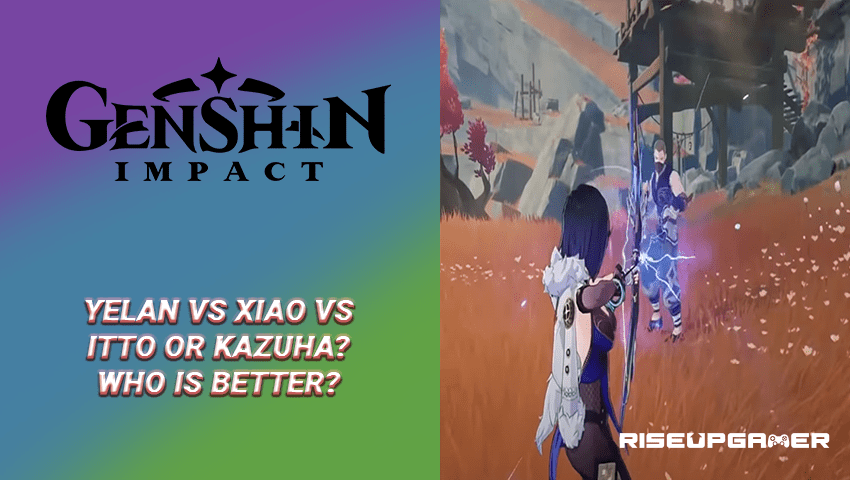 Genshin Impact is completely confusing the players with the newest banners, in choosing between the 5-star powerful characters. All characters in Genshin Impact have their specific and different roles from each other, players have to make a wise decision to choose the character based on their preference and the one that they feel most comfortable with.

In this guide, we will tell you everything about Yelanm Xiao, Itto, and Kazuha & Which Character You Should Pull in Genshin Impact!

Yelan Vs Xiao Vs Itto Or Kazuha? | Which Character Should You Pull?

To make a better decision on your account as to which character to choose, it is important for you to grasp how each of these characters performs and which role they are in to be the best character that will suit your preferences.

Yelan is not officially released yet and technically all we are talking about here is rather speculations. Seeing her in the animation from the live stream and her current stats, we can have a grasp of her power level.

She is going to be an amazing character because the gameplay is quite similar to Xingqiu who’s proven to be a 5-star character in disguise of 4-star. He is practically the top-rated character used in every single bit run of how good of a hydro application that he can be and the damage support that he can do for the team.

However, Yelan is a 5-star character with fantastic gameplay and her animation reminds us of how elegant Yelan animation is. In terms of power level, she is a pretty good character, her skills are rather unique, she turns invisible for up to three seconds passing through enemies and dealing hydro explosions.

Another burst is quite similar to Synchro but different in that there won’t be damage reduction and healing, but it will boost your team damage up to 50%

Xiao is one of the most fun-to-play characters in the game because everything about this demon conqueror is just very unique. His attack animation looks very cool and feels very fast-paced which makes you feel amazing when attacking the enemies.

His charge attack deals an upward strike that can potentially knock small mobs into the air immobilizing them for a bit.

His e-skills are one of the best in the game, he does a super dash driving very fast through the enemies. Not only his normal attack feels rather fast, but he also has his e-skill to boot which makes the battle feels very fast-paced.

His burst is literally one of the most insane in terms of playstyle across all characters because this turns him into a different character. When his burst is activated he turns all his attacks into a Nemo and then he has access to a high jump and a new plunging attack which deals AOE damage from all the spikes coming up from the ground.

Itto is a hyper-carry claymore user. For a hyper carry, he also has interesting mechanics, and it mostly focuses on his normal and charge attack gameplay, which is whenever you use his normal attack. he gets what’s called Superlative Stacks.

These stacks are really important for Itto to dish out an insane number of damage. You can have a maximum of 5 stacks which directly results in how many superlative charge attack you can do.

His e-skill is also powerful. He sends out his Ushi who also gives him stacks whenever it is hit. He also does very decent damage with his skill and has a low cooldown of 6 seconds.

When playing Itto, the main thing you will have to keep in mind is to try having his burst most constantly. You will use his normal attack to gain superlative stacks and hold his charge attack for insane damage output because both his passive talents provide even more power for a superlative charge attack, providing attack speed and a 35% damage increase.

He is one of the few hyper carriers in the game where you want to equally use your normal attack together with the charge attach which will take a bit of time to get used to.

He is a flashy animation character that provides your team elemental damage increase. He seems to have a bit of crowd control from his e-skill but that’s nothing to worry about.

When he was released, he was such a good character from top to bottom. being one of the smoothest characters to play with his beautiful attack animations along with the transition into his e-skill that feels absolutely fantastic.

His elemental buff toward the team is also phenomenal and the damage output that he is able to do is pretty high for a quote-unquote support character.

The only thing to keep in mind for Kazuha is to swirl the correct element if you want the right elemental bost.

Which Character to Choose?

If you haven’t got Kazuha on your account, then having him is actually one of the top priorities for your account right now. If you’re looking to take your damage gameplay to the next level and fully clear the Abyss, because as a top tier character, Kazuha gives you the highest boost out of all the current characters that we’ve got above.

If Kazuha is in the second half, you will most likely go for Yelan or Xiao during the first phase of patch 2.7 because it is still a whole patch worth of saving by the time you get to Kazuha. However, if he is going to be in the first phase of 2.8 you will have to take more time considering which character to pull.

Either way, Kazuha will generally be on the top list of getting if you haven’t got him in your account.

The next character is Yelan because she is a new 5-star and her support capability is absolutely fantastic. She is going to be a sub DPS but you can use her as a DPS as well to enjoy her beautiful attack animations.

The only thing with Yelan is that since she’s quite similar to Xingqiu, she’s going to be a bit of consideration, especially for a free-to-play player.

At last, it will be Xiao or Itto. Generally, they both are characters that come down to player preferences unless you’re really lacking in DPS character.  They’re both hyper carries and if they match to your preferences, you can choose them without compromises.