By Borut Udovic
Check out this guide to defeat Kilocorn Grandeps in Xenoblade Chronicles 3! 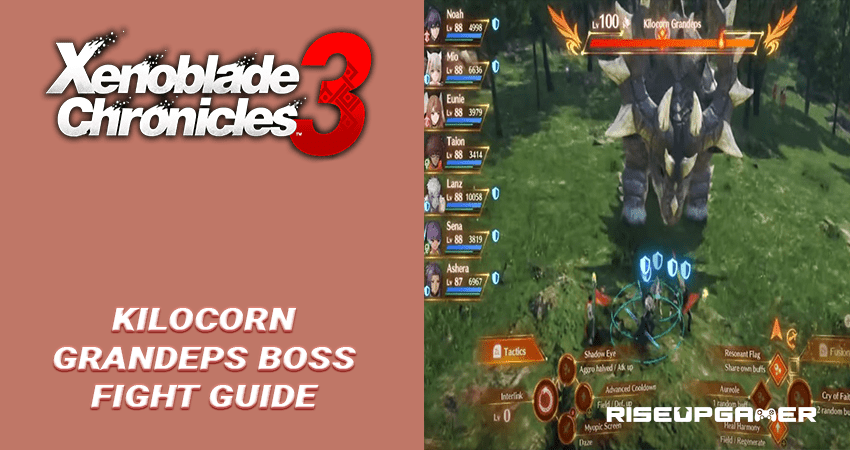 For this setup, we will be using 2 tanks, 2 healers and 2 attackers with the team consisting of Noah, Mio, Eunie, Taion, Lanz, Sena and Ashera. This composition will help us achieve all the chain attack bonuses and maintain the team’s consistency.

Superbosses have a unique mechanic in this game which means once you beat them, you rechallenge all the way till you reach level 200.

This setup will help you as the bosses reach higher levels and become more challenging.

Kilocorn Grandeps can be found in the Fornis region, north of the saffron tree. You can visit there to challenge him and fight against him once you reach level 95.

Defeating the Kilocorn Grandeps isn’t too hard as Mio and Lanz won’t face much trouble with the rest of the group tanking the boss even if you don’t have all the extra tank stats equipped on them.

You just need to stack those buffs with Sena during the entire fight while also stacking the inner link at the same time to level 2 or 3.

The Signifer class allows us to stack buffs very quickly because oriole has a three-hit cooldown so you can spam a single buff attack over and over.

Heal Harmony and Advance Cooldown give charge to your Talon Arts while giving you a bunch of extra buffs as well.

The general strategy here is to spam a bunch of arts with Sena fusing with Lanz to form Ouroboros and then go for the launch combo.

Later, you can leave the Ouroboros form at level 3 and then chain attack. If you are level 3 then you will get the random Ouroburos finisher instead of the longer, better and more powerful chain attack.

Once you are in the chain attack and the enemy is launched as long as you got a good chain attack, you are good to go especially if you got Ashera in the first set of orders, you will be free to spam.

You can use three 2 DPS characters, and one healer alongside Ashera and you are guaranteed to get all three of your characters back.

You can also use a DPS, a tank and a healer as long as you are not going over level 100 with Ashera, you will be fine since you will get that “Amazing” bonus with Ashera.

During the attack combo, you can use Noah to attack first in the combo to give him more TP in the fight for later on and Sena to charge everyone up again.

You can give all the characters an attack boost each time while using the power charge. Since Sena is not attacking so she can continuously provide everyone with a power charge which increases the damage to your arts.

There is also one reason that you won’t need Taion in a Signifer because he can be better in a different class while Sena can carry all the buffs.

As long as you have a strong setup, you can easily defeat these enemies with a simple chain attack given that you get these chain attacks.

You will be able to defeat the boss as long as you are not playing on hard mode or reach a level higher than level 100 where the fight becomes more harder and challenging.

That’s it, now go ahead and defeat this superboss with this strategy!