Use this trick to start as any country in Victoria 3! 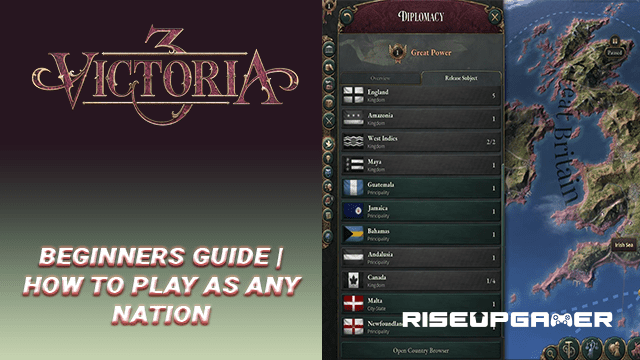 After starting the game, many players discovered that they cannot play as any nation on the map such as Ireland, Scotland or Hokkaido at the beginning of the game since they are locked. But with this simple trick, you can play as any nation that you want including Ukraine, Crimea and Slovakia on the map.

This guide will tell you how to play as any nation in the game.

Beginners Guide | How To Play As Any Nation – Victoria 3

The reason why you cannot play as these smaller nations such as Ireland, Scotland or Hokkaido is that they are subjects of greater power and you need to release them by taking control over them.

So the first thing that you need to do is select a bigger nation in the region where your country is located.

For example, if you wish to start as Ireland then you will need to select Great Britain since it is the bigger country in the region.

Next in the game rules screen, set the Releasable Nations to All and click on the Apply button.

If you don’t have this setting enabled then you won’t be able to release any nation.

Once you adjusted all the rules and settings, start the game and take a quick look at the neighbouring countries and cities.

Press F6 to open the Diplomacy menu and click on the Release Subjects tab to check all the subjects under the influence of your nation which is Great Britain in this case.

We have Ireland on this list and after clicking on it, we can release Ireland as an independent country by choosing the “Release as Independent option”.Another option important option that you need to tick is “Play as Ireland” which will allow you to play as the country which you are releasing.

You can also do the same thing for Scotland, Wales or any other country which is a subject of Great Britain. Press the Release option once you ticked both options and it will change your power level from the greatest power in the world to minor power for Ireland.

You will also get ranked in the Countries Map list based on your prestige level, and population and you will be independent of your parent country.

Similarly, you can take a look at Austria which is another Monarchy with a lot of subject countries that can be released. Open the Diplomacy menu by pressing F6 and check the list of countries that you can release by clicking on the Release Subject tab. You will find plenty of countries here such as Translyvania, Trieste, Hungary, Bohemia, Croatia, Slovakia, Venice etc.

The same thing can be done for Russia which includes many subjects such as Latvia, Lithuania, Crimea, Poland, Ukraine, and Belarus among many other countries.

That’s it, now go ahead and play as your favourite country by following the steps mentioned above!

Victoria 3: How To Fix "General Error"
Read next >
Victoria 3