By Borut Udovic
Check out these essential lineups for Valorant! 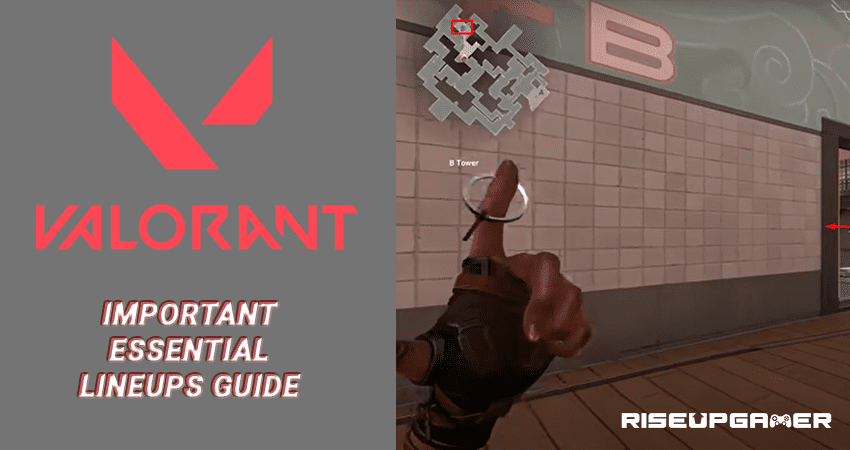 Valorant is a great PVP FPS game that will sometimes require the player to strategize their moves in order to win a game. Knowing some specific areas on where to stand and where to aim and throw a grenade will help you make things easier for the next steps of the strategy, and even sometimes grant you some easy kills.

This guide will show you all the essential lineup points for Valorant!

To get two great grenade shots on the enemy and block their path, you need to go to this specific corner and throw two grenades.

Aim and throw the first grenade on the bottom left of the light marked on the image, and the second grenade to the top right light that’s presented on the image.

If enemies are planting a bomb on B site on this map, just make a running grenade throw at this exact mark, and you will get some easy kills.

Aim and throw your Gate Crash at this specific area to enter the B area safely and kill enemies on the way.

With Sage, stand in this specific corner, and aim your skill between the two leaves which will make the slow land on enemy area where they commonly tend to rush, this will give you time to escape or get a good spot for shooting.

When people push B, you can throw your Phoneix Molotov on this specific area and block the entrance, as well as damaging your opponents.

With Razon you can throw your grenade at these wooden boxes to block the wooden gate entrance with fire.

With sofa you can aim your arrow to shoot at the middle of the bicycle and the arrow will bounce back on the fourth target, damaging your enemy.

Use this location only when the area is smoked.

With Killjoy, place your ultimate at this area and go to this tree, aim the grenade at the small leaves gap to damage the enemies where they are hiding commonly.

With Brimstone, go to this corner, and aim at the right of the building presented in the image. The Molotov will land exactly on the C bomb plant point.

With Sofa, you can shoot your arrow at this specific location to get some information on where the enemies are headed, this arrow will reveal their location. Make sure that the shot is on full charge.

Aim your green grenade launcher at the right corner of the building to land it on A plant site, you will get easy kills with this trick without doing much.

Go to this specific corner on the map and aim at the sky in this specific area, throw your grenade and it will land directly at the C bomb plant point.

You can use this method will multiple characters to damage enemies, and sabotage their plans.

If you want to assist your team by helping them push towards A bomb site, go to this corner of the map and aim your Molotov at the middle of the building presented in the image.

This method will light up the enemy’s area where they commonly stand.

To reveal enemies locations, go with Sofa at B site and throw your arrow with 1 charge towards the middle of the map, aim at this specific area.

You can use Raze and perform a run and jump grenade throw at this specific area to get the bomb to explode at B site and it may get you some kills.

Use Sofa and shoot her arrow to reveal an area with 1 charge shot. Aim just above the flag and the arrow will hit a metal object where it will reveal a whole area on the map.

Use Viper at this specific location and aim at the sky, your grenade will land exactly at the A bomb site and potentially damage or kill enemies.

These essential line up points for Valorant will come in handy when you want to save a messy situation.