Plant the spike and click some heads in Valorant! 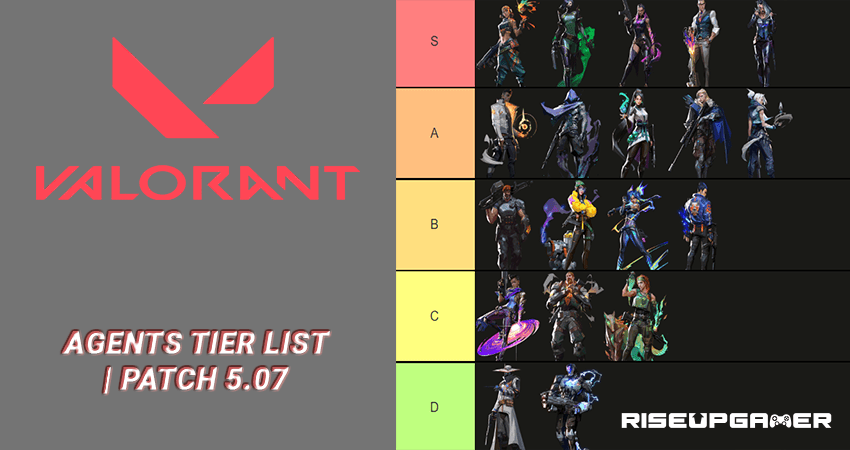 Valorant continues to be one of the behemoths of the FPS genre. Their huge roster of agents and multiple maps makes balancing gameplay a priority for Riot. The team behind Valorant’s balancing changes is always discussing how to fairly balance characters in the meta to make sure that all agents are fair and fun to play against. That said, the changes implemented in this 5.07 patch have some clear winners and losers.

Cypher has needed a buff for a while now, sadly he has received no changes in this patch which means he’s still at the bottom of the tier since there are other better options if you want to play a Sentinel.

Valorant: Critical Error | How to Fix It

Astra’s utility makes it so that you want to play with a friend or two.

Breach performs really well if you’re well coordinated with your teammates, especially with aggressive characters that can follow up with your flashes and stuns.

In this patch, Skye’s Guiding Light can no longer be destroyed, which is a buff. But this comes with a caveat with an increase in Unequip Delay out of it.

Brimstone has a pretty high win rate across all MMRs. His stim beacon and three smokes is phenomenal and makes him very flexible.

Killjoy is really annoying to deal with if you don’t have anyone to counter her with. She’s especially frustrating when a skilled Killjoy knows how to set up optimally. Her only downside is that she’s a bit lacking in power.

Neon is one of the characters with a high skill ceiling. But once you master her, Neon is amazing for any level of Ranked.

Yoru received a buff in his flash’s duration this patch. He was already good before this patch, this only improved his state in the meta.

Riot has shown that Phoenix has a very high win rate. His skills make him very independent and a great solo carry so he’s not as team reliant as other characters.

Omen is a great carry. His teleport and long distance smokes give him the means to make all kinds of plays.

Despite a lot of players thinking that Sage is weak, she’s actually one of the best characters with her great flexibility and utility.

Sova’s winrate is directly related to the player’s experience and skill level. He’s a great character to play while you want to learn more about the game.

Jett is still a phenomenal agent. Her mobility lets her challenge enemy angles and remains of the best duelists in the game.

Raze provides a lot of area denial in her kit and is still one of the best characters in the meta.

Viper is great no matter what map she’s on, especially on Breeze. There’s no character that can fill her shoes at the moment, so until then she remains incredibly relevant.

Reyna received a ton of buffs this patch. Her blind had its range restriction removed, making Reyna one of the best OP counters in the game.

Chamber continues to be one of the best OP characters and while it’s stated that he’s in for some nerfs in the future, Chamber will remain in the S tier until those nerfs come.

Fade is very strong at the moment. She forces enemies to play on her terms, making enemies unable to push up aggressively or using her kit to allow her team a very clean engage.