By Borut Udovic
Time to take on Solarus who is the final boss in V Rising! 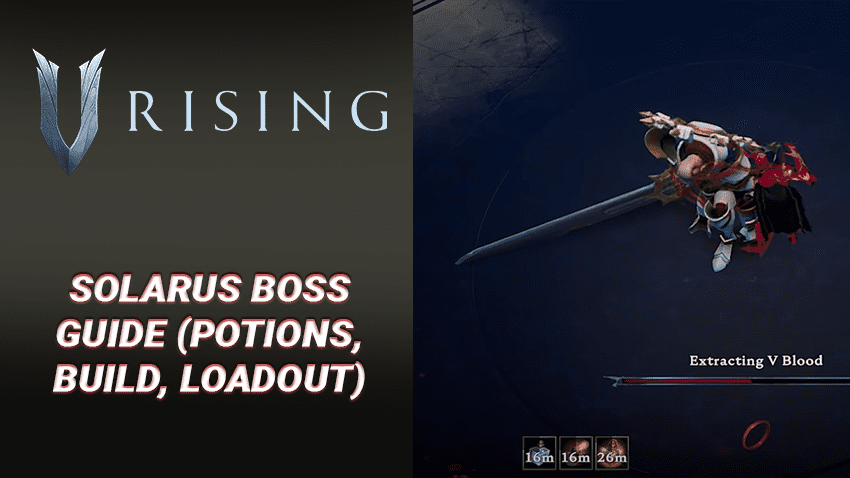 V Rising is a vampire MMORPG with a ton of bosses that you need to go through until you reach the final boss. The final boss of this game is called Solarus and it is one of the toughest bosses in the game. He comes with a variety of mechanics that you need to watch out for. Prepare well and defeat him once and for all!

This guide will show you how to defeat Solarus the final boss in V Rising.

One of the most essential potions that you will need to have for this fight are:

You can consume all 5 potions at once and gain a massive status bonus effect for a short period of time. During this time window, you will be using all of your damaging abilities to maximize your DPS and hopefully defeat the boss quickly.

In your accessory slot you want to equip the Shard of the Frozen Crypt accessory. This accessory will give you the following stat bonuses:

For your weapon, you want to use the Sanguine Reaper. The main reason that this weapon is good is because of the E ability which acts as an extra ranged attack ability.

The weapon also gives the following stat bonuses, they are:

For your abilities you want to use the following strategy:

For your bloods, you want to try and get to 100% blood quality, this will give you the most benefits in status effects. If that won’t be possible, try to find the highest percentage possible.

Once you jump and begin the fight, you will enter phase 1 of the encounter. During phase 1, you will fight Solarus alone, he will use some basic melee attack slashes.

To avoid this ability, simply move out of the way and you won’t get damaged.

Solarus will summon a lot of light beams that will move around the arena and damage you once you get hit by them.

To avoid this attack, try to get as far as possible from the boss, when the light beams travel more and more, they get separated which will give you enough space for you to walk around them.

The boss will also charge towards you and summon light beams on the side. These light beams will do a lot of damage and stun you if you get hit. To survive this ability, try to stand in front of the boss and not get hit by the beams.

The final ability in phase one will make Solarus walk in the middle of the arena and summon two orbs that will shoot out random light balls which deal damage, but not as much. This is your time window to pop every cooldown you have and try to nuke the boss.

When Solarus reaches 50% health, he will summon a Divine Angel to aid him in battle. The Diving Angel has basic abilities such as:

For this mechanic, try to avoid the angel as much as possible and damage the boss until you enter phase 2 for this fight.

Once you get the boss low enough, he will obtain a shield that will make him immune to attacks. He will go in the middle and spawn holy light beams that move in random directions, try to avoid those.

This is your perfect time to jump on the Divine Angel and kill it as fast as possible.

Once you have defeated the Divine Angel, it will turn into a Fallen Angel and shoot a beam towards the boss and break his shield. From this point on, the Fallen Angel will be on your side, meaning that you want to focus mostly on Solarus now.

With phase 2 now taking place, the boss will have the standard abilities that he used to have, he will gain an additional barbarian leap ability which will make him jump in the air and leap towards you.

This ability is noticeable as you will see a big circle appear under you, which will mean that the boss will jump to your location. Try to save your travel abilities for this mechanic to ensure that you will survive.