Check out this beginner guide for Undecember. 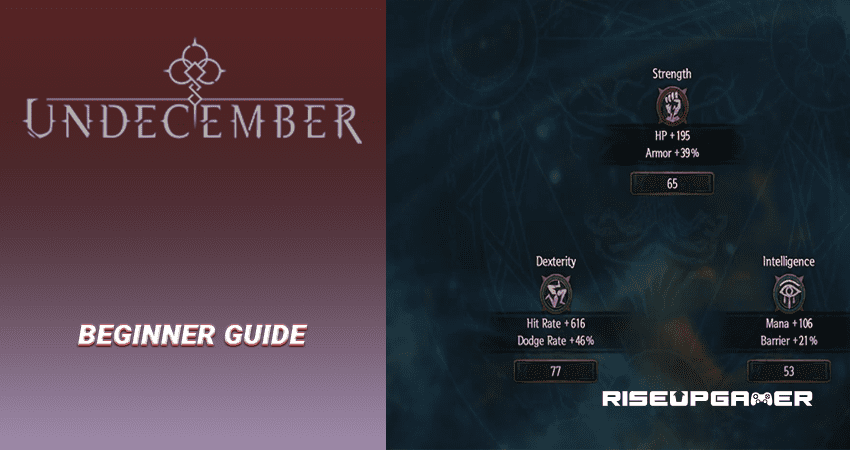 Undecember is a great RPG which has similarities to Torchlight and the Diablo series. In this game, you create a character, male or female and begin your adventures. As you play the game, you will meet up with various NPCs that have missions for you, fight against monsters and defeat bosses that will award you with great loot, as well as open gates to new and more difficult zones.

This guide will show you everything a beginner needs to know about Undecember.

The map layout of this game is random for most players. That is the main seed that each player gets and it will determine how a map will look for them. Press the tab button to open up the map on your screen and explore it as you walk around.

During your exploration, you will see various icons on the map which will represent the following:

As you walk around to unknown area, you will uncover the map and it will stay there forever. So make sure to see if you can uncover the whole make to make things easier for yourself.

In Undecember, you don’t have classes, there is only one class, which is the basic human and you can choose between male or female. As you progress through the game, you will earn new levels, new stats and skills.

How you align your skill points and the piece of equipment that you wear will determine what type of a character you will play. This is a great way to have the ability to not be limited to only 1 play style, instead to be able and play whatever you want.

There are 3 main stat points that you can apply to your character, they are:

The Dexterity trait will allow your character to be more agile, meaning that it will have a higher hit rate and also have a higher dodge chance. This is a great stat if you want to play a fast class that is squishy but packs a ton of damage.

The Strength trait will give your character the ability to be a tank in the battlefield. With increased health and armor, enemies will not be able to leave a scratch. A great trait to have if you don’t want to bother about dying, but deal less damage.

Intelligence is a trait that is mainly used by casters. If you want a ranged class that will shoot spells and deal damage that way, intelligence trait is the right choice.

With Intelligence you will gain extra mana and a barrier that will allow you to stay alive as much as possible in each fight.

As you fight against monsters and bosses, you will notice that looting random items from the ground is easy and your inventory will fill up quickly. That is why the stash system has been implemented in this game which will allow you to keep some extra loot inside and keep it safe as well.

A great thing about the stash system is that there are a bunch of different storage slots that can help you organize your items:

At the start of the game, you won’t have a ton of storage, you need to earn money or crystals if you want to purchase storage slots and increase your inventory space.

To be efficient with your inventory storage, try to keep only high tier valuable items there which are worth a ton of money or you need them for fights.