Tower Of Fantasy: How To Change Avatar Frame

Here is a walkthrough on how to change your Tower of Fantasy avatar frame!

You should use every opportunity to enjoy your time in Tower of Fantasy if you’re joining the numerous other players who have been signing up since August 10th, 2022. Even if certain components are a little harder to notice than others, the gameplay rapidly becomes a clear, approachable experience.

Along with creating or importing your character, which may be tricky to figure out, changing your avatar in the game is another straightforward yet strangely challenging task. Learn how to change your avatar and avatar frame in Tower of Fantasy by reading on!

Tower Of Fantasy: How To Change Avatar Frame

You may communicate with other players online on your server using the global chat feature in Tower of Fantasy. You’ll see that each player is represented by an icon. Although it’s a bit concealed, you may really alter this user icon if you so like.

You may even alter the avatar you use and the frame that surrounds it if you want to further personalize the appearance of your profile. There is no better way to flaunt your personal style than a fresh avatar and frame.

How To Change Avatar in Tower of Fantasy?

You must first enter the menu if you wish to swap out your current avatar for a new one. The three hexagon symbols are tapped in the top-right corner of the screen to do this.

On a computer, you may also hit the ESC key. Press the Backpack button to see the backpack menu after the menu has appeared.

All of the goods you have gathered are displayed in the bag menu along with your character in the foreground.

You may then click on your avatar in the top right corner next to your username by choosing the “character” menu in the bottom left of the screen. You’ll access the character menu by doing this.

Choose your avatar once you are at the character menu. On the right side of the screen, near your character’s name, is where you may find this. The menu for the avatars will then appear. You may choose the avatar you want to use from this option.

With the exception of the two Wanderer presets, this enables you to choose from any of the currently accessible avatars. However, you must first unlock the majority of them.

Shirli and the simulacra, weapons that let you take on another character’s form and personality, are represented by the other avatars. Choose any of the avatars that are shown, click “use,” and presto, you have a new avatar.

How To Change Avatar Frame in Tower Of Fantasy?

To switch the avatar frame you are using, open the menu and select “Backpack” from the list. To access your character sheet, touch the Character button in the lower left corner.

Here, you can establish your character’s birthdate and title as well as get a thorough analysis of their stats. You don’t have to modify them if you don’t want to because they are only for aesthetic reasons.

Tap on your character’s picture next to your name to access your user icon, which is actually why you’re here.

You should then be able to choose from any icons you have unlocked in the user icon list that should now appear.

You may also change the avatar frame by choosing the option in the upper section of the avatar modification box, where you can pick a vibrant and dynamic frame to encircle your desired avatar.

Although Shirli’s avatar and the Shining Star avatar frame can only be unlocked by purchasing the First Advanced Pass, the majority of these avatars won’t be available to you until you’ve attained the Simulacrum Awakening pertinent to the characters (when you’re closer to completing the Astra Shelter questline, so relatively early on).

How to unlock Avatars?

There are 6 avatar frames and 19 avatars to choose from. By awakening Simulacra, which is done by offering them Gifts, you can unlock more Avatars.

You can unlock the relevant Simulacra’s avatar after you have 200 Awakening Points. Tap Simulacra from the menu, then select the Awaken tab to accomplish this.

Each Simulacra has a preferred type of present, and if you give them that kind of thing, you’ll gain extra Awakening Points. For instance, Samir likes games and toys whereas King enjoys rare and limited store items.

By acquiring the premium combat pass, sometimes referred to as the First Advanced Pass, Wanderers can also access the Shirli Avatar. The Initial Avatar: Male and Female Avatar icons are by default unlocked for Wanderers.

By completing the activities listed when you pick them, you can obtain extra avatars and avatar frames.

As an illustration, the avatar of Echo is unlocked as a Simulacrum Awakening Reward.

This completes the guide on how to change your Tower of Fantasy avatar and avatar frame! Now is the time to start awakening those simulacra in order to unlock more. 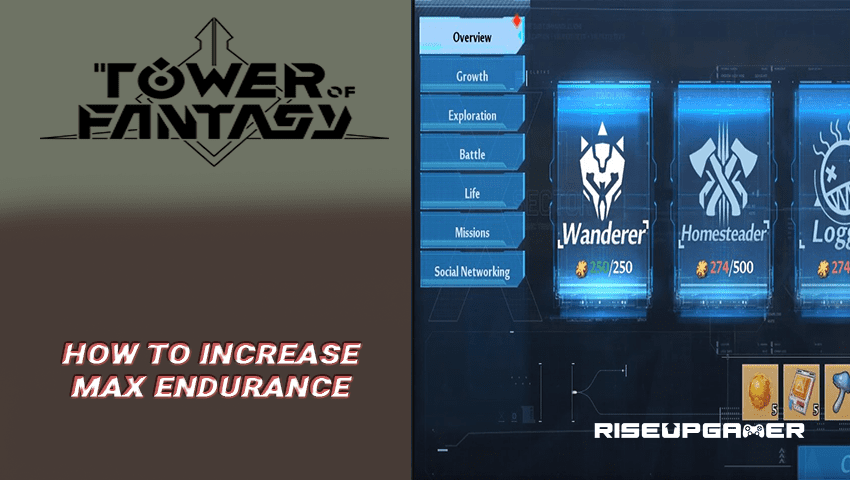 Tower Of Fantasy: How To Increase Max Endurance
Read next >
Tower of Fantasy
Latest