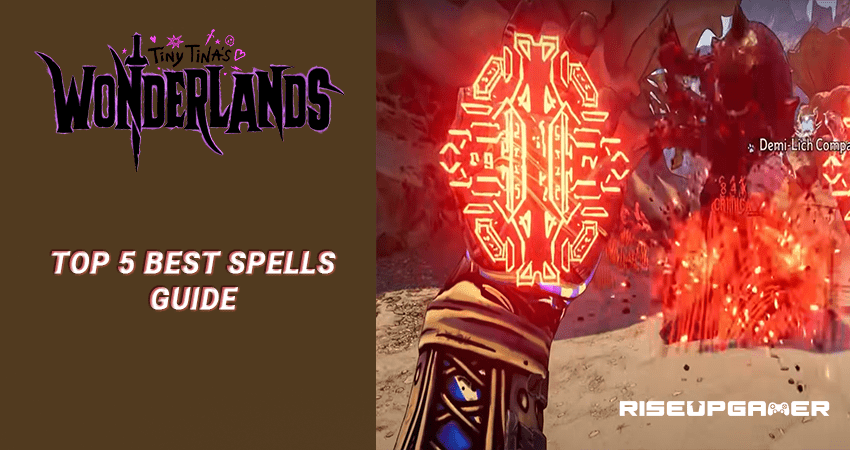 One thing that makes Tiny Tina’s Wonderland separated from the rest of the Borderlands series is the Spells.  The Legendary Spells are some of the most exciting weapons you can use in the game. Also, there is such a wide variation in different spells, beyond even just types of Elemental Damage. If you choose to become a Spellshot player, prepare to collect a lot of Lucky Dice to increase your odds of looting Legendary spells and farm your fair share of bosses.

In this guide, we will show you the Top 5 Best Spells in Tiny Tina’s Wonderlands!

There are so many different variations of spells, so many different uses for spells, Hydra spells, Sigil spells, buffing spells, low cooldown spells like for gun builds just to use to activate enchants. From all of those spells we will focus on spells for dealing spell damage, not as much as utility.

This spell comes typically in one spell cast that deals a ton of damage, but it can roll with an extra projectile.

These Magic Barrages are the highest base damage spells in the entire game and they are decent for mobbing, they hit an enemy really hard.

The reason they are on the list is because of their bossing potential.

That what you are looking for on Sunder spells because sanders is kind of a class here.

This is probably the best mobbing spell in the game for pure mobbing. They don’t hit the hardest, it is not recommended for bosses, but for hitting literally every enemy on the map these are some of the coolest spells to do it.

Their biggest downside is that they don’t hit enemies that are flying or any flying things, but they send these fissures through the ground and they’ll branch out and hit a bunch of things.

These are some of the most consistent damage spells in the game. The reason why these spells are so good is because they come in a ton of projectiles and deal a ton of damage even in four-player scaling an elite enemy, these spells will still one-shot because their damage is just so good.

Their biggest downside is that it can only come in two spell charges, meaning that they’re not the greatest for spamming spells and they don’t hit multiple enemies. However, for boss’s killing, you cast at an enemy and it will basically kill it, guaranteed.

One of the best thing about these spells is they roll with four spell charges and they can get up to five and their cooldown is extremely low.

Even after they were nerfed, they were still some of the most reliable damage spells in the game.

This is a part due to their 100% spell critical damage that always rolls on them. These things have the added benefit of being very quick to cast, you can just snap your fingers and they spawn out.

They are good for mobbing because you get so many charges and they recharge quickly. Also, they’re good for bosses because of their critical damage and their high base damage.