Check out this Wizard’s Pipe! 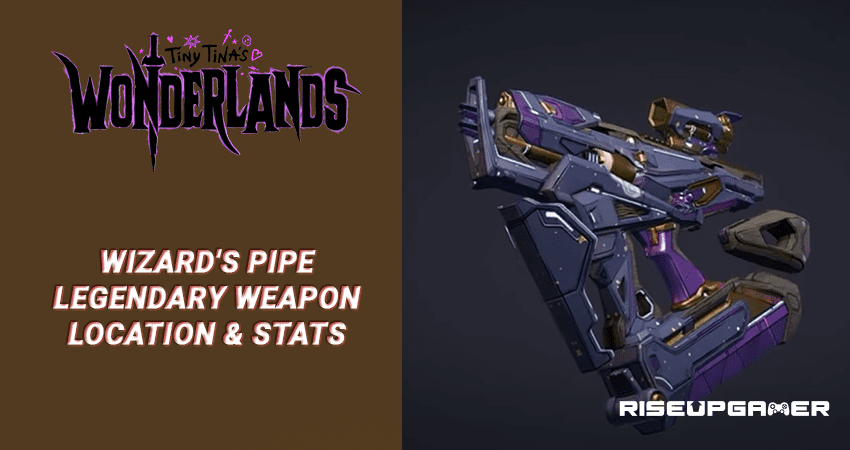 The Wizard’s Pipe is a legendary SMG. A great weapon with a massive fire rate and has the ability to mow down any incoming army. Having the ability to slow down enemies when shooting them will surely give you the upper hand in winning most of the battles.

This guide will show you all you need to know about the Wizard’s Pipe Legendary weapon in Tiny Tina’s Wonderlands.

How to get the Wizard’s Pipe

Head over to Tangledrift, to unlock this area, you must complete a side quest called “Walk the stock” in the overworld.

Go to the Tangledrift fast travel named “What’s Left of Driftwood” and go north until you reach the small island to fight a boss.

Sliding down in the arena will begin your fight with the Parasite boss. Once you kill him you have a chance for the Wizard’s Pipe legendary weapon to drop.

Statistics of the Wizard’s Pipe

The Wizard’s Pipe will require level 40 to be equipped, and once equipped, it will give you 519 item score. The weapon comes with the following stats:

The legendary weapon also has some interesting enchant effects that are useful in battle:

After reloading, gain +50% Companion Critical Hit Chance and Companions regenerate 8% of their Maximum Health per second for 5 seconds.

How to use the Wizard’s Pipe

Firing the Wizard’s Pipe will eventually shoot an elemental ball that type will vary on what type of a monster you attack.

Example: Attacking a flesh monster will launch a fireball because fire damage is more effective on flesh.

The bullets are slow for the weapon, meaning that you want to keep the fight in close range with your enemies.