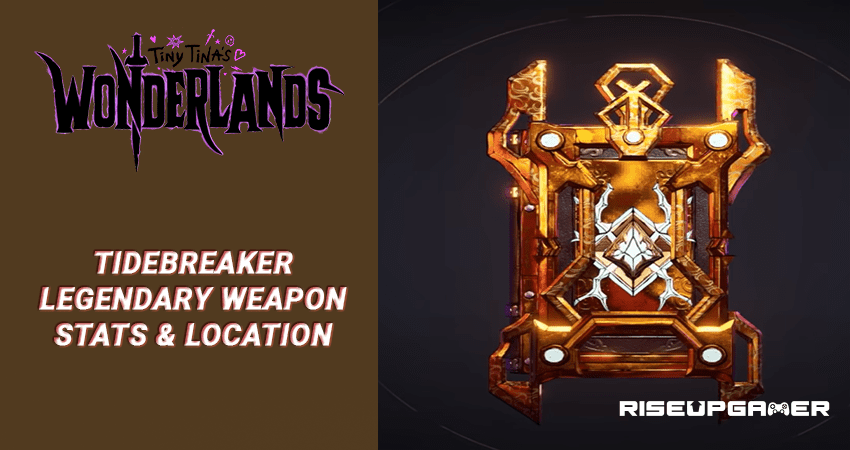 Tidebreaker is a Spell of the Legendary in Tiny Tina’s Wonderlands. The Spell is a part of the Coiled Captors DLC, that has arrived in Wonderlands, and this is one of the best spells that the DLC has to offer. This spell is the first of its kind and it comes with a new Status Effect called “Soaked”. The Spell sends out a tidal wave and has insane reach.

In this guide, we will show you the Location and the Statistics of Tidebreaker Legendary Weapon in Tiny Tina’s Wonderlands!

How to get the Tidebreaker

To get this Legendary Weapon you have to farm from Dreamveil Overlook, by starting the Coiled Captors run. Defeat the last boss who is called Chum to drop the spell. You can also get this weapon by the new Wheel or actually get it from the Chaos Bunnies. Chaos Bunnies seem like the best method for acquiring the new gear.

Defeating Chum is pretty easy, as there is no armor or shield on the boss.

On the card item, we have the Fatebreaker.

This is a kind of water-themed spell. The Tidebreaker is a Cryolocked Spell that has the special effect of the new Soaked effect, enemies that get hit by it take a 150% more damage from lightning or Frost, but 150% less damage from Fire.

This spell plays very similarly to a sunder spell. It is a very long-range AOE spell, that will hit a bunch of enemies and leave them nice and soaked.

The damage is good enough and it seems like it will be better for debuffing or a mass debuff for the spells.