Thymesia How To Beat Odur Boss

Time to defeat Odur the Ringmaster! 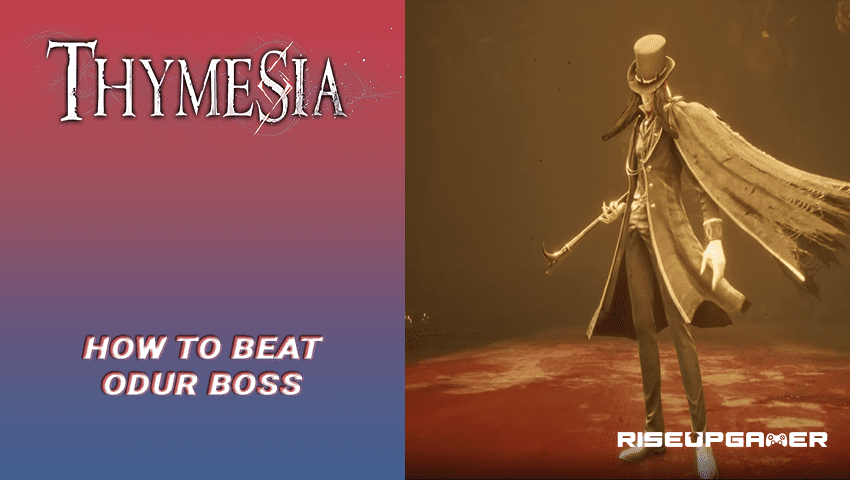 Thymesia is an action-adventure RPG game involving fast-paced combat where players take the role of a character called Corvus living in a kingdom infested with plague. During your journey, you will encounter various enemies, including the Odur boss, the first boss in the game.

This guide will tell how to defeat the Odur boss in the game.

How To Beat Odur Boss In Thymesia

Odur can be found at the end of Sea of Trees and he is a wicked Circus Master who uses all the tricks at his disposal including illusions, sword attacks and kicks to wreak havoc on his enemies.

He is a two-phase boss who is difficult to defeat at every range making him a worthy foe.

You will need to perform the Saber Combo and when he blocks it, dodge the incoming attack. Perform a claw attack and then keep repeating it with a Saber Combo.

This way you will be able to quickly deplete his first health bar.

Once you completed clearing his first health bar, the screen will turn black and you will need to walk forward to start the second phase of the fight.

You need to be careful as he will be more dangerous during his second phase and you will need to study his attack pattern before making any moves.

Odur will also start teleporting from one place to another while slashing his sword toward you.

Watch out for his red-coloured attacks as these are unblockable and can have a great impact on your health.

As long as you manage to dodge and parry at the right time, you will be safe during this fight.

He will also do a green attack that will allow him to heal his health and you need to be wary of those too.

Once you manage to find an opening, perform the same attack combo that you did in the first phase and you can then easily engage him in a loop.

After you defeat him, you unlock the Odur trophy as well as receive the Forgotten Feather consumable  and Odur’s Core story piece

That’s it, you have successfully managed to defeat Odur in the game!

Thymesia "You Shall Not Pass" Trophy Guide
Read next >
Thymesia
Latest