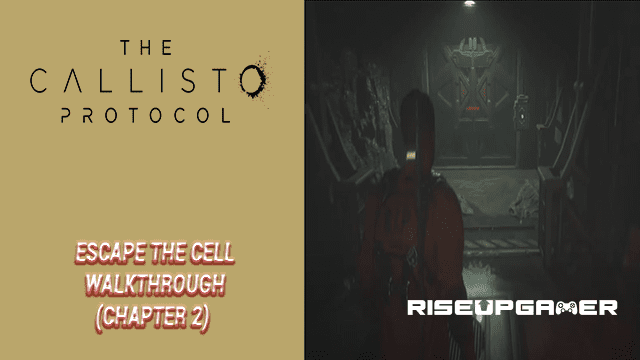 Found yourself lost in the second chapter of the atmospheric science fiction new release, The Callisto Protocol? Below is a thorough guide on how you can navigate the dark prison and hopefully get out of it in one piece. Here is how you finish The Callisto Protocol’s Chapter 2: Outbreak.

After surviving the crash from the past Chapter, Jacob will find himself locked up inside a prison. On top of that, he’d notice that he has a worrying collar device now on his neck.

The Chapter starts with a nightmare sequence of Jacob. Wander around if you want. To proceed with the next section of the Chapter, look for a glowing purple cube on the floor. Interact with it.

Jacob should then wake up from his dream state. Exit the cell.

Head to the right now and follow the main path. Make your way down the stairs, and at the bottom, you should see a prisoner to the left calling for your attention.

Approach him cautiously and speak with him. His name is Elias and after a short conversation, he will give you a Shiv in exchange for freeing him from his cell.

You should receive the Desperate Times trophy/achievement after Elias gives you a Shiv.

After that, hop over the crates beside Elias’ cell and interact with the gate’s control panel ahead. Jacob should then use his Shiv to open it slightly. Squeeze through the gate.

Cross the narrow bridge now to your left. As soon as you reach the central tower, follow the path around until you find a door. Again, use Jacob’s Shiv on the door’s control panel.

Once inside, you’ll be attacked by a group of desperate inmates. This section is where the game tells you about the basics of attacking with a melee weapon and dodging. You’d also pick up a Crowbar here.

After dealing with the inmates, you’d have to deal with an infected next. Make use of this brief encounter to hone your dodging and melee attacks further.

Once that’s dealt with, head over to the nearby console and interact with it. This should open Elias’ cell finally.

Exit the door and return across the bridge towards Elias and meet with him. However, you’d soon find out that the gate is locked. Follow the path to the right for another way back.

Continue along the main path and fight off another infected. This is where the game tells you how to block and finish off downed enemies using a stomp.

At the end of the main path, head right to find an elevator. Ride it to the level below.

Exit the elevator and follow the set path. Crawl through the opening ahead. As soon as you reach the next walkway, another infected should pop up. Defend yourself.

The Callisto Protocol: How To Get The Skunk Gun (Shotgun Location)

Keep along the walkway. Look for health injectors along the way; they appear as medical supply boxes with glowing green lights. The game should tell you all about it promptly.

Near the end of the pathway, you should see the elevator to the right. Use the panel to call it, and then step inside to ride down to the Solitary.

Follow the linear path through this area. As soon as you reach the end of it, grab the Energy Converter from a crate before interacting with the door next to it.

After passing through the door, enter the first cell you see on the left and get some credits. Exit, then, to the second cell on the right. Squeeze through the half-open door and you should see a loot crate.

Follow the passage to the right. Take note that if you stomp a corpse here, a Facehugger should attack you. Fling it off using the button prompts the game shows. At the top of the stairs ahead, you should see a Loot Chest to the right.

Call the elevator now at the end of the hall and ride it up to the infirmary. Once there, move forwards and jump over the stretchers to trigger the next cutscene.

You would now need to sneak past the prison’s Security Bots as they are ordered to kill everything on site. Following the brief cutscene, move forwards and enter the vent on the left wall.

Wait for the Security Bot to exit the next room before dropping down. The Bot should pause in the hallway outside for a moment, crouch and sneak past it and move to the right. Proceed through the open door ahead.

Continue through the next couple of unlocked doors. Some may require you to use your shiv. Keep sneaking around and make sure that no Security Bot sees you.

As soon as you reach a door labeled: Implant M110, a Security Bot should make a right and proceed down a hallway away from where you are currently. Grab the Health Injector near the door.

Enter Implant M110 now. Here, you should see another Loot Chest. Looting it will trigger a Facehugger and attack you. Get rid of it.

On a crate by the exit, you will find a Data Bio: Dr. Caitlyn Mahler – Mahler’s Appointment. There would also be a Gate Fuse there on the wall near some surgical equipment.

Opposite the door here, you should see some stairs that lead to a door where you can use the Gate Fuse on.

As soon as you pass through this door, an enemy will emerge from the flames and attack you. Fight him off using everything you have learned so far. After the encounter, go to the next pair of doors to the Security Control Area.

Continue through the vents now until you reach a room with two large fans. Here, two infected should attack you. Try to keep both enemies in sight at all times. Killing at least one of them should end the encounter.

Enter the next vent to continue into the lockup. Another cutscene should play out. Jacob will pick up a Stun Baton and replace his Crowbar.

After that, use the nearby console to open the door. As you approach the unlocked door, the other infected you were fighting off just recently will attack again. Defeat him to continue.

Take the set path through the hallway and continue through a pair of doors to return to the cell block area. Follow the path to the right. You should see the bridge leading to the watch tower there.

Just past the bridge, you should see another pair of infected. Get close to them and try to body-pull one without the other seeing you. Take note that when you engage them head-on, yet another two infected should appear. Defeat all four of them.

After clearing the enemies, hop over the barrier nearby and enter the cell on your right. This is where Elias was a while ago. Inside his cell is the Data Bio: Elias Porter – Elias’ Anticipation.

Exit the cell and climb the nearby metal staircase. At the end of it, head through the security gate and across the bridge to an elevator. Hop on it and ride upwards.

You should then see Captain Ferris behind a glass wall communicating with the prison security. Sneak by him to the right and interact with the panel on the door to use your Shiv. This will trigger a cutscene.

Continue through the next few doors and a security gate until you reach the large blast door. Proceeding through it will end the game’s Chapter 2. 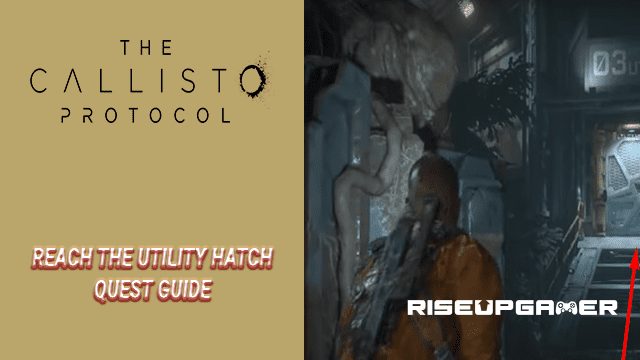