Meet every character in Soulstone Survivors! 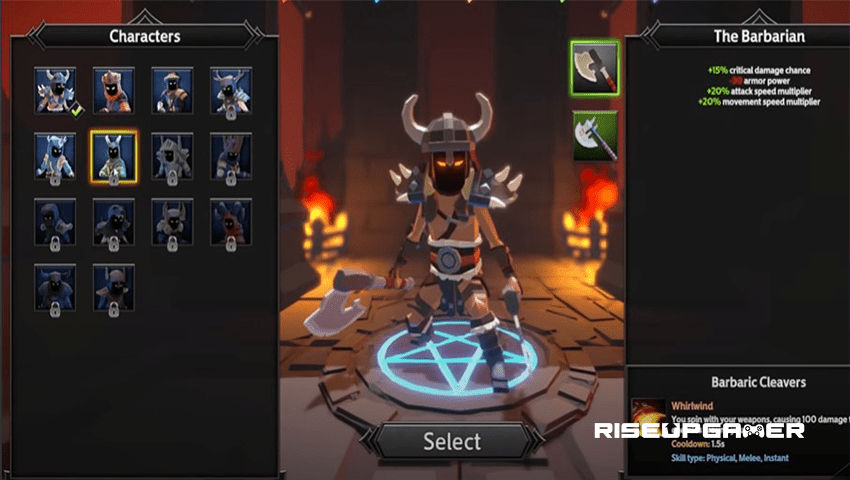 Soulstone Survivors is an action rogue-lite adventure game where you need to fight against endless minions to collect your soulstones and become a god. There are multiple characters that you can choose from with each one of them offering unique skills and abilities so it’s important that you know everything about them.

This guide will introduce you to all the characters that the game has to offer.

All Characters in Soulstone Survivors

At the start of the game, we have the Barbarian as our starting character who primarily deals melee damage with decent stats like critical damage chance, attack speed and movement speed multipliers.

Equipped with his barbaric cleavers, he annihilates his enemies with the whirlwind skill.

The next character is the Pyromancer who can be purchased with 5000 Minor Soulstones and offers the ability to fight against enemies at range.

While she may have low armour and health but her critical damage multiplier and area multiplier easily compensate for her weakness.

She can easily burn her opponents to ashes with her Fire Slash which can cause 50 damage and apply burn.

Last but not least is the Hound Master who can be unlocked for 10,000 Minor Soulstones and he is another ranged character that will help you keep your enemies at bay.

He can fire blasts of pellets from his rifle that can cause a bleeding effect on the enemies while his loyal hound hunts for his prey.

That’s it, these are all the characters that you unlock in Soulstone Survivors!