Rogue Legacy 2: Scar Locations – Where To Find All Scars

Scars are kindly hard challenges that will test your combat and platforming skills in the game. After you collect them, you will be rewarded with trophies and Souls based on your performance. Most of the Scars are locked or hidden in some secret places. They appear in the castle as a red memory. Once you read that memory, by interacting with it, the challenge will become available in the Drift House. There are 16 Scars in total, with the first one available from the start.

In this guide, we will tell you Where To Find All Scars in Rogue Legacy 2!

Rogue Legacy 2: Scar Locations | Where To Find All Scars

The very first Scar is right at the start of the cave, behind the NPC you will find it and pick it up.

This scar is pretty simple to be found. Continue walking on from where you just got the simple start scar and you will see a little fireplace.

Use the spell to the right of that and you will see a secret cave where you will find your second scar available to you.

This Scar will require you to defeat Estuary Lamech in Gitadel Agartha to unlock the location, and you will also need the canopy talent. However you get that, the easiest way is using a ranger and will have to use the talent right below the scar at the beginning and you just grab it.

This Scar will require you to defeat the Skeleton at the end of Axis Mundi in Void Beast Byarrith. Once you’ve done that, you have to get yourself a dwarf character. In the next area, you have to go to the Pizza Mundi in the middle of access Mundi and fire at the barrels to the left. That will open a crack which will take you to the next Scar.

For this Scar, you are required to defeat Estuary Naamah, then head over to Kerguelen Plateau. You are going to fall down the edge, but you are going to use a spell, Barbarian Shout, to open the little cave.

At the bottom of this cave, you will find your Scar.

The requirement for this one is to defeat Estuary Enoch in the Stygian Study. You have to go back to the lower room where you will see a bunch of books and on the left, there is a barrel and a secret door where is your next Scar, Closed Space.

The requirement for this one is to defeat Estuary Tubal in Pishon Dry Lake. You have to go to the storeroom where you enter into a little barrel. There you will find a wide room and simply head to the upper right corner and break the wall in front of you.

Pass through the cracked wall and go all the way straight until you find the next scar at the very end.

For this Scar, you need to defeat Prime Laamech in Citadel Agartha. It moves forward to the Prime Bosses. It is going to be above gong heads. Just brake the wall and go into it.

There you will be able to go through a door and there will be a Scar waiting for you.

For this one, you need to defeat Prime Void Beast Byarrith. The Scar is located just on top of the building, at the right corner, where you get the damage buff for the boss.

This Scar will technically only be available after you have reached NG+3, because you have to unlock the prime number first after you defeat Prime Naamah.

Once you arrive at Keguelen Plateau, drop down on the bridge on the left and head right until you hit a wall. Break that wall and go through the tunnel but don’t go all the way to the next room. Instead, stop in the middle to find a hidden door containing a scar.

This one is located in Enoch’s bonus damage room and you need to defeat Prime Enoch in Stygian Study to unlock this. Head toward the right and activate the bridge by pressing the interact button at the edge of the ledge.

Cross the bridge and go all the way up until you see a telescope. Drop down on the ledge and walk all the way to the left until you find yourself in a room containing a Scar at the top.

For this Scar, you will have to defeat Prime Irad in The Sun Tower. Go all the way up back to where the max damage boost is. Head to the tower of light and hit the middle of the left wall to reveal an entrance. The scar is literally right next to Lumex damage boost

Continue to go all the way up by using the platforms available until you find another door at the top. Once you enter the door and come to the platform, to the top of the tower you will find your Scar.

This Scar requires to defeat Prime Tubal and also has a special requirement and you cannot defeat any Estuary on your current thread. After you defeat Prime Tubal, restart your thread and go to the Pishon Dry Lake then go toward the Nibiru Deep room.

From here, drop in the middle of the poison lake and break the wall on the left side using a magic attack. Pass through the cracked wall and go left until you find a door that will take you to a room with the scar at the bottom.

For this one, you also need to defeat Prime Tuball, the same unlock requirement as the previous one. This is much simpler.

You have to get to the far shores and halfway through on the little rock you will see The Armada Scar.

First off, you need to defeat Prime Cain, the prime version of the final boss. You need to do a lot of od playthroughs to get to this point. After that, head over to the tutorial area by resetting or changing threads.

Just go through all of the tutorial checkpoints up until the one where you’ll have to use spin kicks for climbing a building. However, instead of going right, climb up the wall and go to the left until you reach the previous building’s roof using dashes or double jump.

Once you reach the campfire in the middle of the building, you will be able to drop down until you find a hidden area.

Go all the way down, then go right until you come across a door that will take you to the next room where you have to drop to the bottom end.

At the door you have to use the Mysterious Key.

After you use the mysterious key, there will be a bunch of journals from Eupraxia and you will eventually get your Divergent Dimensions Scar.

Those are all the scars that you can obtain in Rogue Legacy 2! 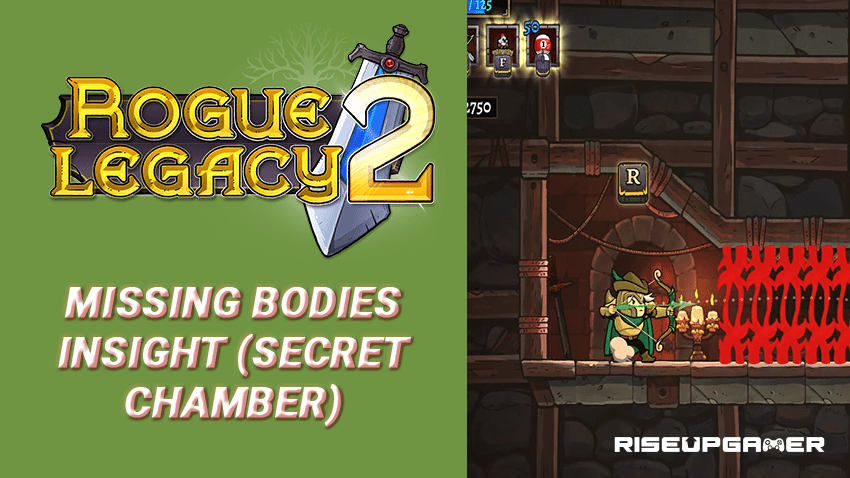