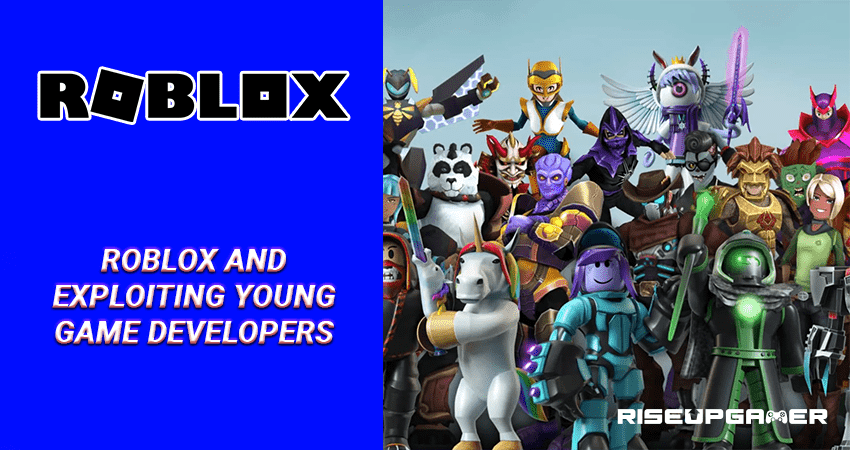 We’re all familiar with the game called Roblox. At some point in our lives, we have played the game for a varying amount of time. Some people played it once and never played again, some people hop back in from time to time, and some play for years until the present day.

Roblox is marketed towards a younger audience, so naturally, you’ll find a majority of young children playing the game. The game allows players to create their own games to share to other players ranging from First Person Shooters, Horror, Puzzle, Deathruns, and many other genres.

However, there are whispers going around the internet that say young game developers who are using Roblox and its engine are being exploited by the developers in charge of Roblox.

Roblox’s Model & Why It Might Be Exploiting Young Game Developers

Ever since 2021, many content creators and other influencers began to point out how Roblox’s business model can do more harm than good. The mysteries were slowly beginning to be unraveled, and some still have mixed opinions on the topic.

Some videos from well-known content creators and Roblox players go into an in-depth investigation on how Roblox is taking advantage of young game developers for profit.

In one video, Quintin Smith of People Make Games, explains how game developers in Roblox can monetize their games and be paid in the virtual currency called Robux. However, he points out that it’s hard to get your game to be popular when millions of other players do the same.

Roblox comes in with a solution, which is to have developers bid for an ad slot at an auction. Sounds very black market-ish, right?

Unlike most platforms like Reddit or YouTube where you can just pay a certain amount of money to have your content be advertised, Roblox’s method will only work on who bids the highest, which leads to game developers spending more to stay at the top.

If a developer wants to turn their Robux into straight cash, there is also an option. You can withdraw a minimum of 100,000 Robux. In US dollars, the equal to that is $1000.

However, Roblox puts another hinderance to the user, as you can only perform this action by paying a monthly Roblox premium membership.

Quintin Smith also points out that Roblox purchases Robux from developers and users at a different rate than it sells them. For example, 100,000 Robux gets you $350, which shows a big difference already.

The success of Roblox isn’t just built on their shady monetization. Roblox is simply an engine, meant for other people to use to create their own unique games.

But since Roblox is marketed towards the younger audience, Roblox rose to success with the help of youngsters creating, often times, some very unique games with little to no effort from the Roblox team, except providing a stable engine to develop on.

One could say that younger players helped Roblox become the gaming giant they are today.

While they won’t specifically say that they counted on players creating games for them, it’s fairly obvious that, along with their monetization practice, Roblox relies on the imagination (and wallets) of their young developers to stay afloat.

In the video from People Make Games, they were able to interview an 11-year-old game developer about his experience in trying to make it big in Roblox.

“Even though Roblox encourages you to make games, the likelihood of you making a successful game is basically zero.”

As quoted by the young developer, who goes on to say that competing to have a successful game is difficult when you’re going up against people with money.

While Roblox maintains their family and kid friendly image, it’s obvious that the method they’re using to keep Roblox up and running is questionable.

These kinds of practices are normal in the internet, especially in games such as Roblox. Does that make it right? No, it just means that this type of practice has been normalized.

I’m not saying that the Roblox team is evil or its reputation should be tarnished, fact is that the Roblox engine has provided a great stepping stone for most young and enthusiastic developers.

My take though is that we need to have more open discussions on how this platform can be polished, and have a more rewarding experience for every single Roblox developer.