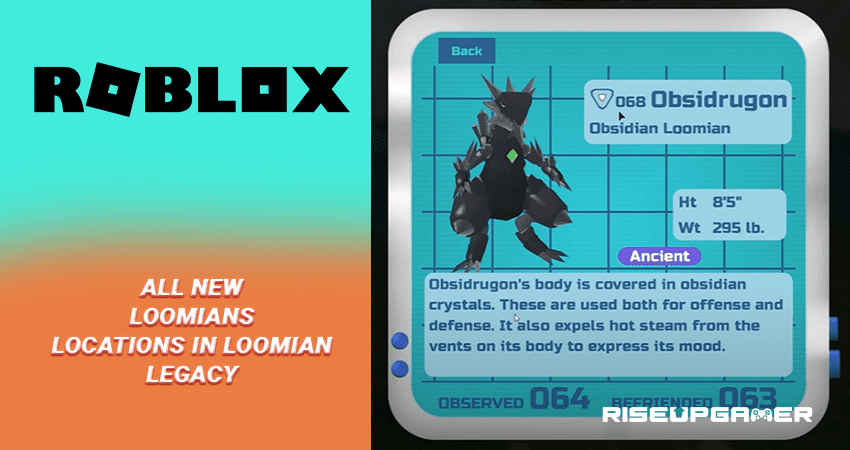 Loomians are unique, fictional, animal-like creatures that can be found throughout the Loomian Legacy series. They come in different types and are born with distinct kinds of power. Loomian Trainers capture, bond, and battle with them to learn more about these creatures while growing up alongside them. In the new update, there are 20 new Loomians that you can get as far as what they evolved from and how to get them.

In this guide we will show you how to get all new Loomians Locations in Loomian Legacy – Roblox!

The first Loomian is Slugling.

You can easily find this Slugling in Route 4.

You have to find and fight him.

Once this Slugling reach level 20, it will turn into Escargrow.

The next Loomian is called Gastroak. This one evolves from Escargrow at level 32. To obtain this Loomian you have to level up your Escargrow.

The next one is Kabunga. This one you can find in route four.

The amazing thing about this one is that he can have two different evolutions.

After you get Kabunga, no matter what level he is, if you just trade him across the board to someone else, then it is going to evolve into Wiki-Wiki which is the next Loomian.

If you trade Kabunga in the trading resort for a Kreital instead of anything else, it won’t evolve into a Wiki-Wiki, it will instead evolve in Chartiki which is the next new Loomian.

The next new Loomian is called Shawchi.

You can find this Loomian in Route 4, which is a kinda rare one and you may need to keep on trying several times before it appears.

This Loomian doesn’t evolve yet.

Next Loomian is called Rakrawla. This one you can find on Route 5 which is an easier one to find.

Rakrawla evolves in Sedimars at level 25 which presents the next new Loomian.

The next Loomian that you can find is called a wild Gumpod which can be found on Route 5. This one is also very easy to find if you are closer to the water.

Gumpod evolves at level 26 to become Ventacean, which is the new Loomian.

This Skilava is found in the Cave, at the place where is called The Igneous Hallow.

Skilava actually evolves to Geksplode at level 22 which is also a new Skink Loomian.

The next one is coming from the evolution of Geksplode at level 38.

The next on the list is Craytal. This new Loomian can be found in the Igneous Hallow in the Cave.

This is an easy one to find.

This one also evolves as a Kabunga. You have to do trade across the board for anything except for Kabunga, then Craytal will evolve into Krakaloa.

If you trade Craytal for Kabunga across the board then it will evolve into Volkaloa.

The next one is kinda rare to get. It is called Igneol.

This one is also found in the Cave. It doesn’t show as often.

Igneol at level 24 evolves in the new Loomian which is called Crysite.

This Crysite al level 42 will evolve to Obsidrugon which is the last Loomian on the list.