Let’s go through and check the walkthrough of Stony Cliff Titan in Pokemon Scarlet & Violet! 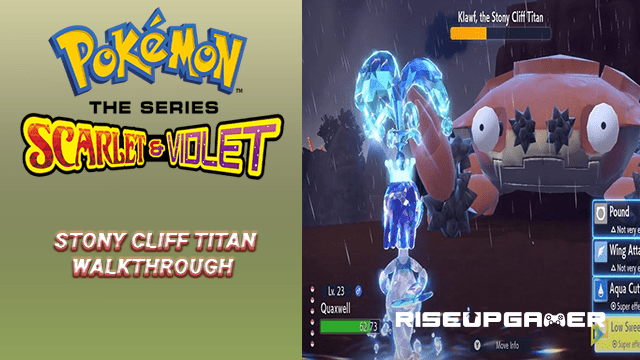 Stony Cliff Titan is a Rocky-type Pokemon who is one of the five Titans that you are going to encounter in the Path of Legends storyline in Pokemon Scarlet & Violet. This Titan is located in South Province (Area 3) and upon defeating he will reward you with an amazing ability. Better be ready before you start the battle and defeat him quickly and easily.

In this guide, you will find everything about the Stony Cliff Titan in Pokemon Scarlet & Violet!

Klawl The Stony Cliff Titan is a Rocky-type Pokemon and one of the five Titans that you have to defeat in the Path of Legends storyline.

To find him, you have to navigate to the east gate of Mesagoza, in the middle of the road that is going from Mesagoza to Artazon in South Province (Area 3).

Follow the path that goes up to the hill and you can easily spot this big Stony Cliff Titan.

Pokemon Scarlet And Violet: Where To Find Ice Stone

Before you start the battle with the Titan, make sure to have a team of around levels 15 – 20. If you are below this level, you will have a hard time defeating him. Also, you could evolve your Pokemon which will give you access to better stats and much stronger moves.

Just get closer to him, and he will come down to the ground and inflict the battle.

Because he is a Rock-Type Pokemon, it is recommended to start the battle with a Grass or Water type Pokemon.

Once you drop his HP below half, his special and normal attack together with the speed will increase, but it will cost him defense and special defense decreasing, and because of this it is recommended to attack him with Super Effective moves when his HP drops.

It should not take you so long to defeat him, and after that, he will go back to its regular non-Titan size which is the right time to catch him with your Poke Ball.

Also, after you defeat him, you will be rewarded with an amazing ability for your mount.