Use the Soothe Bell to improve your friendship levels with a Pokemon! 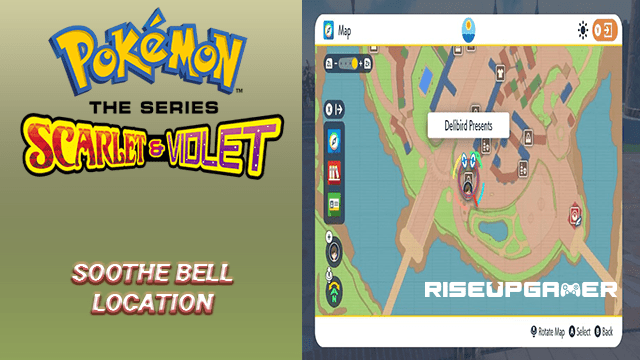 This guide will tell you where to find a Soothe Bell in Pokemon Scarlet and Violet.

In order to find the Soothe Bell, you will need to head over to the Delibird Presents shop which can be found in most major cities around the map.

However, most people are likely to find it in Mesagoza which is the first city that you will visit. These shops can be easily found in most major cities so availability isn’t going to be an issue.

Once you reach there, enter the store and access the General Goods section. There you will find the Soothe Bell item by scrolling down in the list. It can be purchased for 5000 P which isn’t much if you decide to save your money from the start.

You can purchase multiple Soothe Bells and use them to make a Pokemon more friendly and calm towards you. This can be really useful if you want to increase your friendship level with a Pokemon such as Eeeve to level it up and evolve it faster. Just equip it on a Pokemon and you are good to go.

That’s it, now go ahead and use the Soothe Bell to take your friendship with a Pokemon to the next level!