Check out this guide to find out the location of the Paldean Tauros in Pokemon Scarlet and Violet! 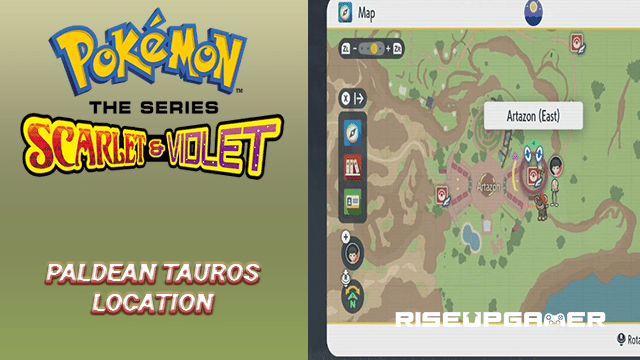 The Tauros is a fighting pokemon that looks like an angry bull and specializes in close-quarter combat. He has a muscular body and short horns that he uses to attack the weak spots of his opponents.

This guide will tell you where to find the Paldean Tauros in Pokemon Scarlet and Violet.

In order to find the Paldean Taoros, you will need to head over to the location above in Artazon (East) on the map. Once you reach there, you will find them roaming in the area all the time.

You can get to this area relatively quickly by spending a couple of hours and this is the major town that you will encounter if you head towards the east on the map.

Usually, the Tauros can be found in the West and East Province of the map at any time of the day irrespective of whether it’s day or night.

The Tauros has now received a makeover with a pure black colour and grey horns that makes him a fighting pokemon instead of a normal one.

There are potentially three forms of Tauros out there: Fighting Tauros called the Combat Breed, Water Tauros known as Aqua Breed and Fire Tauros identified as the Blaze Breed.

That’s it, now go ahead and head over to the place above to catch the Tauros Pokemon!