Head over to find the Great Tusk, the Quaking Earth Titan Pokemon! 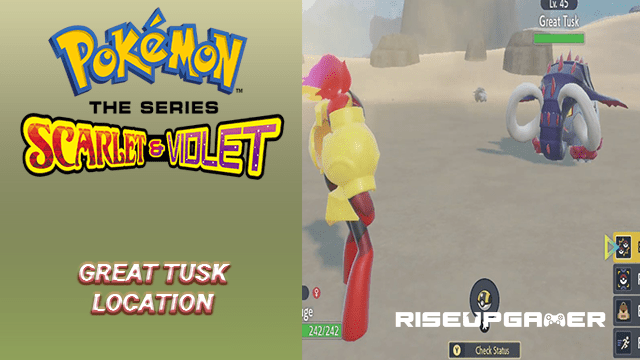 The Great Tusk is a new type of Pokemon which is exclusive to the Scarlet version. It is a ground Pokemon that can fight with two large tusks. With a total of 570 combat points, this new Pokemon is certainly worth adding to your collection

This guide will tell you where to find the Great Tusk in Pokemon Scarlet.

In order to find the Great Tusk, you will first need to defeat him as a part of the game’s storyline. It is one of the five titans Pokemon that you will face during the Path of the Legends storyline.

The Great Tusk is exclusive to Pokemon Scarlet while Pokemon Violet players will encounter the Iron Treads.

You will need to be atleast level 45 or above before you decide to fight against the Great Tusk, the Quaking Earth Titan. He can be found in the western section of the Asado desert close to the Porto Marinada Pokecenter.

Once you reach there, you will receive a call from Arven when the Titan is close, confirming that you are in the correct location. You will then need to fight against him and the Great Tusk will eat a herb before starting the battle.

The best way to counter him is to use Water or Fairy moves and you can also use poison attacks if your level is below the minimum requirements.

After the battle ends, you can enter the cave to collect the Herba Mystica and this will unlock a new exploration ability for your Pokemon. It will allow you the Koraidon or the Miraidon to glide in the air.

That’s it, now go ahead and find the Great Tusk to add him to your Pokemon collection!