Check out this guide to find the Dratini in Pokemon Scarlet and Violet! 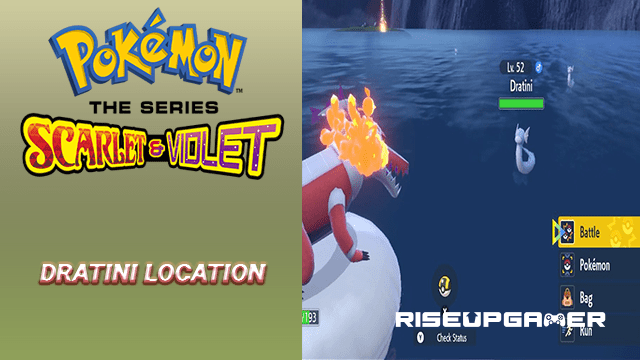 Dating is a dragon-type Pokemon that looks like a snake and is generally found near water bodies. This purple and white coloured Pokemon has the special ability that allows him to sheds its skin as it grows larger and it is protected by a rapid waterfall during this process.

This guide will tell you where to find Dratini in Pokemon Scarlet and Violet.

In order to find the Dratini, you will first need to unlock the Surf ability and reach atleast level 50 in the game.

You will need this ability to surf along the water for finding Dratini since he is generally found near water bodies.

Dratini can be usually found at Casseroya Lake where you will find several of them and you just need to swim along until you encounter them. Once you find one of them, battle against it to weaken and then put it to sleep using an item. You can then capture him using the purple-coloured Ultra Ball to add him to your collection.

There are other locations where you can find a Dratini such as the lakes around North Province (Area One and Area Two) and the river in South Province (Area Six). However, the best chances of getting your hands on one of them are at Casseroya Lake.

That’s it, now go ahead and unlock the surf ability to find some Dratinis!

PUBG: How To Know Where You Get Shot From
Borut Udovic
Tower Of Fantasy: All Artificial Island Gold Nucleus Locations
Borut Udovic
Tiny Tina’s Wonderlands: Last Gasp Legendary Ward Weapon Location & Stats
Borut Udovic
Saints Row: Where Is Save File Location
Enes Duru
Valorant: How To Fix Error VAL 51 “There Was An Error Connecting To The Platform”
Borut Udovic
Latest