Check out the Junker Queen Tips & Tricks, and the Abilities in Overwatch 2! 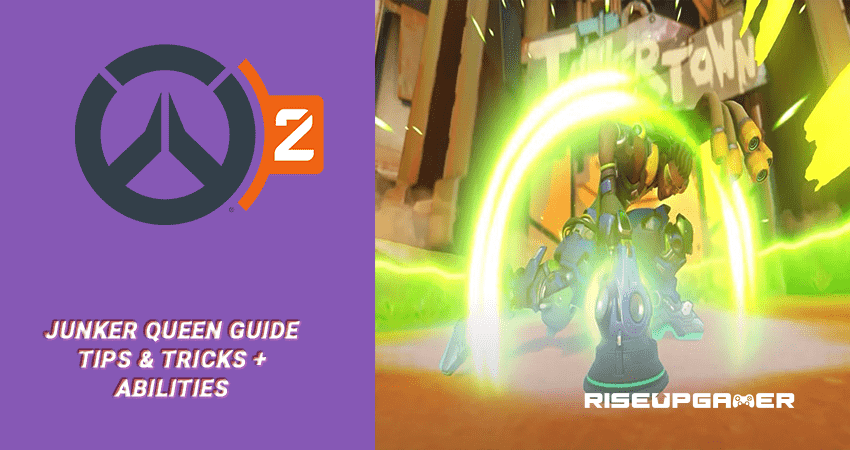 Junker Queen is the new tank role that is introduced in Overwatch 2. If you want to get the best potential from this character, you have to understand her abilities and what is the best way to use them on the battlefield in order to stay alive. The Junker Queen kit is not super complicated you should know some of the tips and ticks together with her abilities before you jump into a match with her.

In this guide, we will show you Junkers Queen Tips & Tricks together with her Abilities!

This passive ability heals from all damage over time dealt by wounds.

Jungle Queen’s primary fire is a Shotgun with a pretty tight spread called a Scatter Gun. She does the most damage up close, but can also do pretty good poke for mid-range.

Jagged Blade is a secondary throwable skill shot knife. When you hit someone with it, you are able to pull them back towards you when you recall the knife.

This can be used to set up plays with your team. When you hit the knife, you are able to call it back to you whenever you choose in the next three seconds, and have to be smart enough when you choose to pull the enemies.

Commanding Shout ability allows you to increase everyone’s health and speed instantly. This ability is amazing for pushing into the enemy team or surviving a close call.

With the Carnage ability, Junker Queen swings and acts of damage and wound all enemies in front of her. This attack also wounds enemies it hits, and slashes a group of enemies and they take extra damage over time.

This ultimate ability lets her charge for dealing damage over time to all enemies in her path. This also applies an NTO effect to all enemies, so try and line up as many people as you can.

Junker Queen’s biggest strengths are that she can sustain herself on the front line while dealing out massive damage to enemies who try and brawl her. Her jagged knife can also set up kills for your team during fights.

Her ultimate is also very strong, hitting a group of enemies will almost certainly guarantee they die while applying an anti-heal to them, and also does 100 damage over time which is half the health of most characters in Overwatch 2.

However, she does suffer a long-range and on maps where it’s hard to get on top of the enemy team. She excels most in close-quarters brawls, so any sort of poke will whittle down her HP eventually as she has no armor in her health bar to sustain.

Overwatch 2: How To Fix The Queue Time Problem

Junker Queen should always be looking to get in the face of her enemies. At full health slashing and shotgunning at her enemies is extremely valuable. However, you have to be smart about how you do this, as many Junker Queen’s enemies can spam her out from range. You are going to want to use cover as much as you can.

Play corners as much as possible to avoid being low HP before you push the enemy team. On defense make sure to play in choke points and punish your enemies as they try to push through them.

Playing next to a choke point sets up great opportunities for damage as well as big axes since it’s guaranteed to be a close-range fight.

Junker Queen’s Jagged Blade is one of the most important abilities she has and you have to communicate with your team before you recall the knife and pull some enemies to you.

Commanding Shout works is a very similar way, it feels like a mini rallying but be careful not to use the like one. While it does give you extra HP and movement speed, it won’t keep you up in longer fights.

Must pay attention to when your enemies are weak or low on cooldowns and then push them with a commanding shout. The extra HP will be just enough to keep you alive and the movement speed will let you chase down and finish your weaken enemies.

This applies for the opposite scenario as well. Commanding Shout can also be used to help you and your team survive an enemy push when you all are low.

The ultimate ability and Carnage are quite similar, and they are best used into groups of enemies.