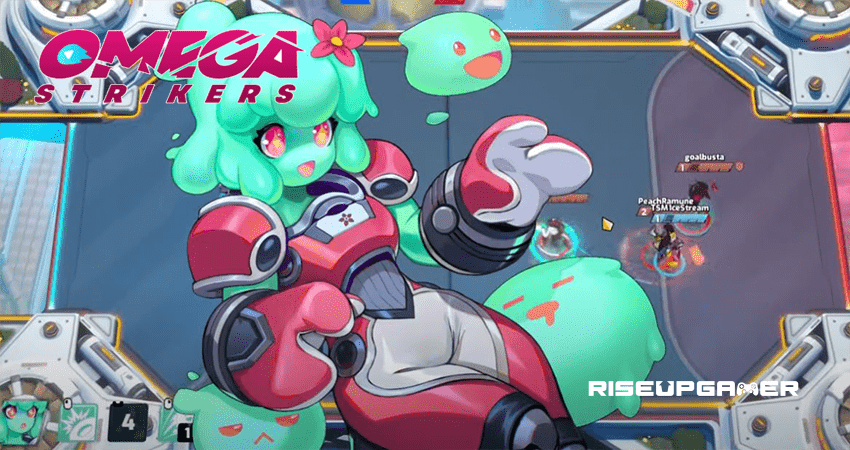 Omega Strikers is the newest free-to-play knockout game that places gamers against one another in an attempt to score more goals than the other through the strategic use of skills. Basically, it is soccer mixed in with fantasy elements. Each character in this game possesses their own set of abilities that can push foes outside the playable area, speed up progression, and so much more. This makes one character truly unique from the next.

For this guide, we will be taking a look at a very flexible character that can be played extremely well in various roles, the blobby yet very cute Juno.

Juno is primarily played in a forward position due to her strong focus on scoring and handling the ball, however, she can also be played well when put as a goalie.

She controls the center pretty well with most considering her the full package as she’s one of the most versatile characters in the game.

Her primary ability, the Friend Fling, allows Juno to launch a blob projectile on the field or towards an enemy that deals medium damage and creates a blob on impact.

Its cooldown is pretty short so you can spam it whenever it is available.

Take note that you may also control the blobs you produce.

Juno’s secondary ability is the Blob Bounce. Much like her primary, this ability creates a blob as well, but this time under Juno herself.

It blocks the ball when hit, making for a good defensive ability.

It launches her over a short distance becoming Elusive while airborne. Elusive targets are untargetable and invulnerable.

This is an extremely useful skill as it bypasses all incoming damage and repositions you to where you should be when timed perfectly.

Her special ability, Make it Rain, targets an area and launches a massive blob projectile into the sky. After a few moments, the cluster splits, raining down several blobs.

The amount of blobs created is dependent on the number of enemies and allies targeted on the field (minimum of 1 each).

Like her other abilities, the blobs created by her special block the ball as well.

Time this one right and Juno can make miracles. However, when used improperly, it can go against you.

Now, to the Training sets best suited for her.

First is the Creator of Durable Things. This is a no-brainer considering Juno’s abilities and her constant production of blobs all over the field.

This training makes it so that creations gain 100% duration and hit 5% harder.

Next is the Creator of Large Things. This fortifies Juno’s creations even more as it lets them gain 50% more size while also allowing them to deal 5% more damage.

For the last Training, you can go various ways. That said, we recommend you go for Extra Special instead as it reduces special ability cooldown by 15%. And we all know how useful Juno’s special can be.

Following this guide will surely take your Juno gameplay to the next level. Try this build out in a couple of matches let us know what you think.

Remember, Juno is a versatile character, she encourages experimentation so do not be afraid to play around with other certain builds.