Know how to get all the achievements in Mount & Blade II – Bannerlord here. 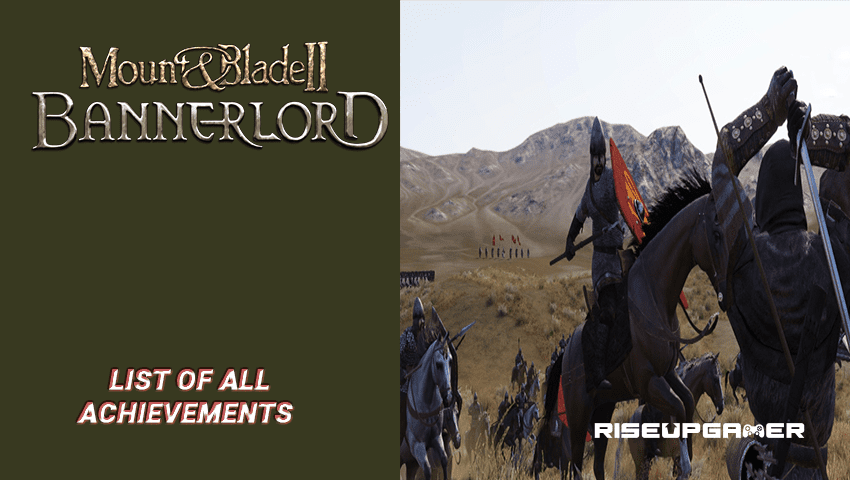 Curious about the achievements Mount & Blade II – Bannerlord has in store for gamers? Maybe you are already playing it and wondering how to complete them? Then you have come to the right place! Below is the list of all the achievements you can get in the new installment for the highly-acclaimed Mount & Blade franchise.

Here is the full list of achievements in Mount & Blade II – Bannerlord:

Before proceeding, take note that some may contain spoilers for the game. So, if you want to experience the game with a blind perspective, its best that you leave now.

Furthermore, keep in mind that some achievements in-game are purposefully labeled as a secret to surprise players with satisfaction, while some can only be achieved through the game’s multiplayer mode alone.

Without further ado, here they are.

Own a workshop and a caravan at the same time.

Start your own kingdom.

Defeat Radagos in a duel.

Defeat a force that has 500 more troops than you.

Assemble The Dragon Banner of Calradia.

Capture a town on your own.

Kill a King or Queen in battle.

Repel an attack on the walls.

Become the leader of the tournament board.

Visit every settlement in the world in a game.

Score a headshot from 200 meters away.

Defeat an army with your party alone.

Execute a lord that has killed one of your clan members.

Become a king or queen with 21 clans under your rule.

Kill 10.000 other enemies in captain mode with your troops.

Kill an enemy player with a boulder.

Kick an enemy player off a wall to death.

Get melee, mounted melee, ranged, mounted range and couch lance kills in a skirmish round.

Unlock all other Achivements.

In multiplayer, kill 500 troops with ranged weapons while on horseback.

Execute a lord that you have -100 relations with.

Complete all projects in a settlement.

Marry the widow of a lord or lady you personally executed.

Have 100 butter in your inventory.

Have your 7th kid born.

Spawning on foot, commandeer a mount and kill 5 enemy players without dying.

Complete an issue of a hostile town.