Time to complete all the puzzles in the Jungle level! 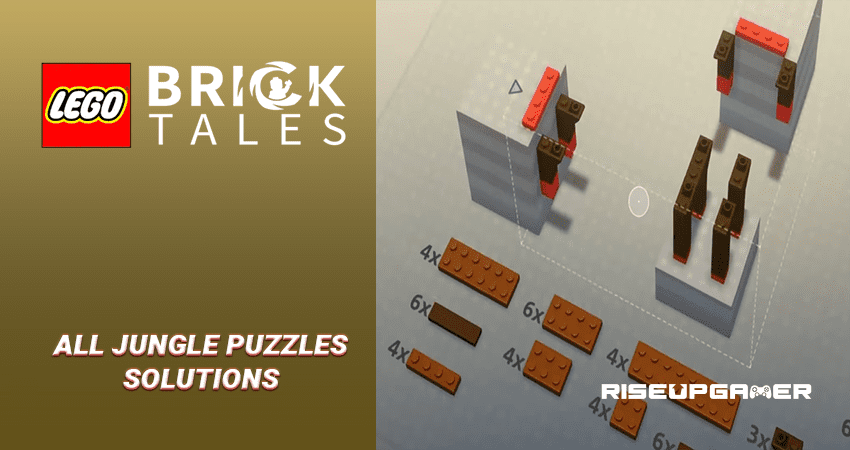 The Jungle level is one of the easier levels in the game as it starts with some simple puzzles that get complex as you progress further and further.

This guide will tell you how to solve all the puzzles in the Jungle level of the game.

Build a set of stairs to reach the top

In order to create the staircase, you will need to first place the brown brick on top of the base and then place another brick after leaving one line exposed.

Repeat this process by placing the bricks on top of each other and leaving a gap of one line each time.

Remember to use the thick brick and switch to the thinner ones once you run out of them. Place two thin bricks near the final base to level the staircase.

Build a canopy walk to cross the river

It’s time for you to construct a bridge across the river and to start, you need to place the four cylindrical shaped bricks on all four corners of the bridge.

Use the small rectangular-shaped strips to form the base of the bridge.

Attach the two small white stripes in the middle of the bridge and the rectangular ones horizontally below the bridge.

Create four more pillars using the cylindrical shaped bricks and place them on top of the horizontal stripes.

Attach those white rectangular bricks on top of those pillars to strengthen the bridge and the puzzle will be solved.

Build support for the platform

The third puzzle requires you to create support for the platform in order to rescue an archaeologist.

Start by adding those wedge-shaped bricks at the bottom of the platform.

Next, use those small square bricks to create the left pillar and then attach those wedge-shaped bricks to fill the gap.

For the right pillars, attach those wedges and inverted wedges to one another to create another pillar.

This will solve the puzzle and create the platform.

The fourth puzzle requires you to create a replica of the Monkey Statue. Grab the brick in the middle and rotate it before placing it.

Place the square brick behind it and then attach the rectangular strip on top of it.

Add the brick on the right behind it to form the shoulder and then attach the nose of the monkey.

Attach the head of the monkey and the puzzle will be complete.

Improvise a stairway onto the hill with some planks at hand

To improve the staircase, first, you need to place all the brown bricks as shown above.

Now attach the square and small rectangular bricks to form a staircase.

Connect the rest of the bricks in place and the puzzle will be solved.

Build a gyrocopter out of spare parts to rescue the journalist

Start by adding these four blue rectangular stripes to form the base of the Gyrocopter.

Now place the model in the middle, add two lights in the front and two grey-coloured bricks to form the sides.

Add two blue-coloured bricks behind the model and place two red lights with white brick in the middle.

Place a blue strip on top and two grey-coloured rectangular bricks next to it.

pillar. Place the small blue rectangular bricks on both sides for aesthetics.

Attach the fan of the Gyrocopter and place the two small black bricks on both sides to solve the puzzle.

Build a walkway to overcome the gap

First place the small brown bricks on top of the orange ones to create a pillar and then attach the wedge-shaped ones to form a base.

Attach the small brown bricks so you can connect the rectangular ones on top of it.

Similarly, add two rectangular stripes on the other side to complete the bridge and solve the puzzle.

Build a ride for the zipline

In order to create the ride for the zipline, first, attach the wedge-shaped bricks in the following order shown above.

Insert an inverted wedge at the bottom and then place a brown rectangular pillar in the middle to create the seat. Place the model and the puzzle will be solved.

Last but not least is solving the puzzle in the ancient temple to open the door.

First, you need to place the monkey on top of the red platform and then rotate it as shown above.

Attach the two cylindrical shaped bricks behind the monkey and connect the longest arms to them.

Keep adding those arms to create a large L-shaped arm and then place the crystal on top of the final plate.

That’s it, you have successfully solved all the puzzles in the Jungle level of the game! 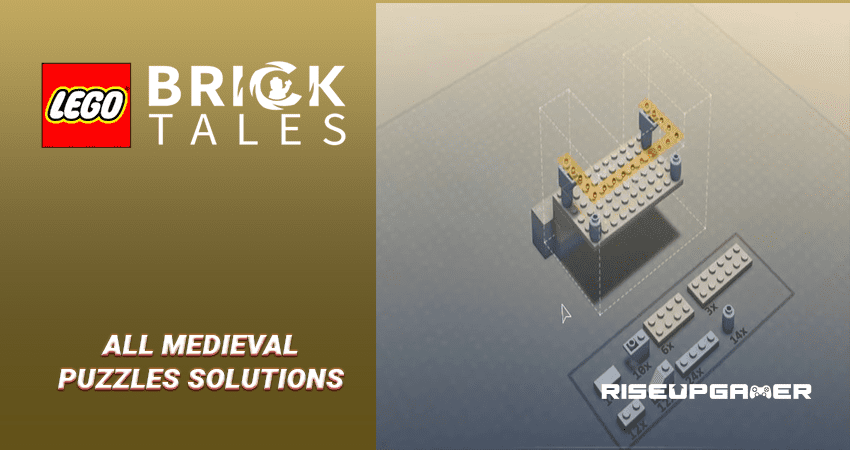