How to Catch Legendary Bass in Bassmaster Fishing 2022

Who would’ve thought you’d catch a legendary being outside of a Pokémon game? Well, this game has some pretty wild Basses. 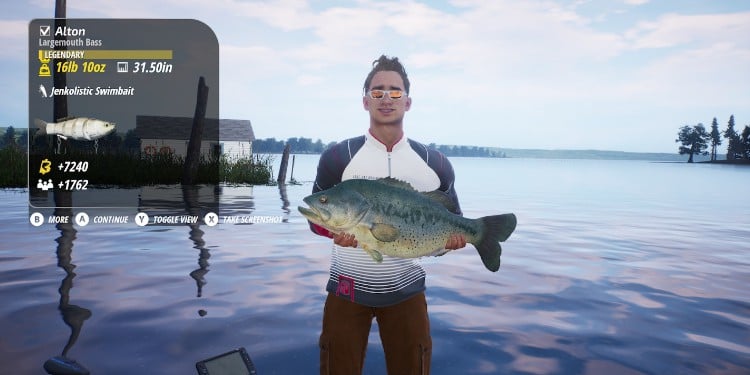 You know what’s the best part about games nowadays? Fishing. RPG games such as Final Fantasy XV and Tales of Arise has gotten players so hooked into fishing, they’re considering fishing games. One such game that offers lots of fish to catch is Bassmaster Fishing 2022. You know what’s the best part? You can catch legendary fishes. That’s right, folks. Bassmaster Fishing 2022 has several legendary fish to catch, one of which we’ll learn how to catch, called Legendary Bass, today.

In Bassmaster Fishing 2022, catching a largemouth bass is considered a battle of strength between you and the fish. The largemouth bass fights hard and attacks with utmost ferocity, but leaps out of the water like a majestic mermaid.

Truly an experience to behold.

There are several locations where you can find a legendary bass. It’s up to you to choose which location you’ll want to go to.

To catch a largemouth bass, you’ll need to understand how to catch it and what bait to use.

These fish are carnivorous creatures, often praying on other fish for food but they can also eat a variety of different food.

Some examples of food they eat are small baitfish, shrimp, insects, and scuds, but those are only when the largemouth bass is young.

When they get bigger, they eat slightly bigger prey. Smaller fish like bluegills, crawfish, frogs, snakes, snails, shad, small water birds, bats, and smaller alligators. These largemouth bass fish are no joke, so catching one requires significant skill if they can eat young alligators.

So in order to catch a largemouth, you’ll need to use bait that looks like their pray. The One Knocker Yellow Perch bait is considered one of the best baits to lure them in.

It’s a surefire way to catch a largemouth, but there are other alternatives to catch them.

The Deep Little N Black Blue and Deep Little N Nutter Shad are also great baits to use against the largemouth, as they resemble the closest to their natural prey.

But if you’re looking for something that looks exactly like a fish, then we got something just for you.

The Jenkolistic Swimbait. A hard plastic swimbait that looks realistic enough to fool any largemouth.

Choose any of the aforementioned baits and you’re good to go catch a legendary largemouth bass.

Not For Broadcast Endings | All Endings
Read next >
Bassmaster Fishing 2022