Trevor just wants a partner for his business! 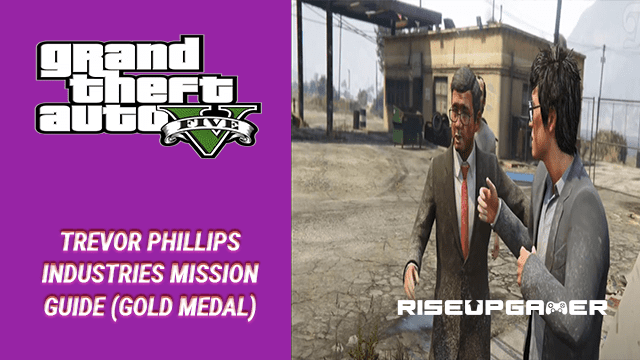 In an effort to start his own thriving business (an illegal one), Trevor sets up a meeting with Tao Cheng, the son of Wei Cheng, the head honcho of the Los Santos Triads. However, before the two can even get down to business, their meeting is cut short when Trevor receives a warning from Chef that the Aztecas are out to hunt him and destroy his starting business.

Now Trevor needs to fend off the attacking party to continue his business meeting with the VIP. Here is how you complete the Trevor Phillips Industries mission and get its Gold Medal completion.

Trevor arrives at the Yellow Jack Inn in Sandy Shores, San Andreas, for his meeting with Tao Cheng, which has his translator by his side.

While determined to get his meth business to the next level by incorporating the Los Santos Triads, Trevor gets annoyed seeing that Tao Cheng arrives at the meeting high as hell.

Before Trevor could walk out of the meeting, however, the translator convinces him to reconsider. He lays out the benefits of Trevor Phillips Industries working with them.

Reluctantly, Trevor hears him out and agrees to show them his lab and the operation.

The three then ride to the meth lab using Trevor’s truck. On the way, Chef unexpectedly calls.

Chef will warn Trevor about the Aztecas attacking his operation. Despite the warning, Trevor proceeds to take Tao Cheng and his translator to the lab.

In the guise of a tour, Trevor leads the two to the ice boxes on the side of the lab. He then pushes the two inside to hide them from the chaos that is about to begin.

Trevor and Chef will then rush inside and arm themselves ready to defend their business.

After the opening cutscene, drive with Tao Cheng and his translator to Trevor’s meth lab. It will be highlighted by a yellow marker on the map.

Another cutscene would then trigger. After that, you then need to defend the lab from waves and waves of Azteca members.

Do not worry about taking headshots for this mission. To get the Gold Medal, you just need to rack up 32 kills. That said; also remember to take cover in between shots to not take too much damage.

Take advantage of the conveniently placed red canisters as well to blow up incoming Aztecas vehicles.

After the initial wave of enemies, follow Chef to the other side of the building and deal with the Aztecas on the pickup truck.

Aim at the large orange gas tanker and shoot at it. Once it starts leaking, shoot the standing fuel to create a big explosion.

Follow Chef once again to the other side of the building to take out even more Aztecas. Use the 40-mil Chef will give you to blow up incoming vehicles.

After taking out all Aztecas, promptly return to Tao Cheng and his translator outside. Another cutscene should play.

Freezing and understandably annoyed, the translator takes his client as far away as possible from Trevor and rushes out of the scene.

After that, the mission should end automatically.

Body Count: kill 32 enemies. Shoot at every enemy you see and be sure to kill them. Do not bother taking headshots; just kill them by any means necessary.

Unmarked: complete the mission with minimal damage to health and armor. Always be in cover throughout the shootout. Also, take advantage of Trevor’s special ability.

Scrap Man: destroy six vehicles. Use explosives and take advantage of the red canisters and oil tanks throughout the area.

Mission Time: complete the mission within 4:30. Skip cutscenes if you want.

There you have it! Getting the Gold Medal for this particular mission significantly depends on what you do in the long shootout section. Just go all out and remember the tips we laid out above.