The three protagonists come together for the first time! 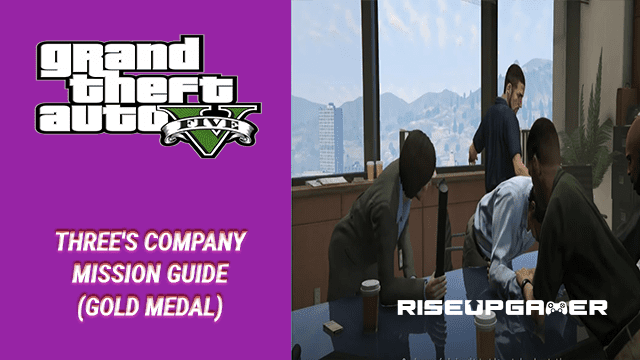 Three’s Company is the first storyline mission where you play the three protagonists of GTA 5 at the same time. Franklin meets the crazy Trevor for the first time during this mission. They are to help Michael satisfy the needs of his FIB friends, Dave Norton and Steve Haines, and, in effect, preserve his status as a free man.

In this guide, we will be showing you how to complete the Three’s Company mission and earn its Gold Medal completion.

There, Haines explains that the IAA is currently interrogating Ferdinand Kerimov, the man who Michael and Dave think holds information about the corruption within the FIB.

Haines wants Michael to extract Kerimov from the IAA Headquarters before he could speak and implicate him and Dave.

At first, Michael refused but was immediately coerced by Haines using his superior position within the Los Santos authorities.

Understanding that the mission would be hard and ultimately dangerous, Michael calls for the men whom he trusts the most: Franklin and his old pal, Trevor.

Thus, begins the mission to attack the IAA Headquarters.

After the opening cutscene with Dave and Steve at the FIB Headquarters, get into Dave’s car to the next waypoint where Michael meets with Franklin and Trevor.

Upon arriving, another cutscene should trigger. Franklin meets Trevor for the first time and after a bit of bickering, the three finally commence with the mission at hand.

After Michael gets ready, fly the helicopter using Trevor to the designated waypoint on your map.

Then, use Michael to rappel down from the helicopter to the floor where Kerimov is being interrogated.

Watch the cutscene that follows then break in when prompted.

As soon as Michael takes Kerimov, switch to Franklin to start sniping the people inside. Pick them off one by one then switch to Michael to shoot down the remaining enemies on the floor.

After clearing the building, several helicopters should swoop in to take you out.

Snipe them down using Franklin.

Switch to Michael after that to gun down the rest of the helicopters set to chase you. Take advantage of Michael’s special ability to slow down time in gunfights.

After taking down all the helicopters, fly back to the FIB waypoint using Trevor and land the helicopter safely to finish the mission.

Mission Time: complete the mission within or under 7:30. Skip all cutscenes if necessary and fly the helicopter as efficiently as you can.

Accuracy: finish the mission with a shooting accuracy of at least 60%. Make every shot count, especially on the sniping sections. Make full use of Michael’s special ability as well.

Headshots: kill at least 10 enemies with headshots. Always aim for the enemy’s heads. Again, use Michael’s special ability as often as you can.

There you have it! Follow the steps we mentioned above and soon enough you should get that Gold Medal on the bag!