Michael, Trevor, and Franklin put their differences aside for one last mission! 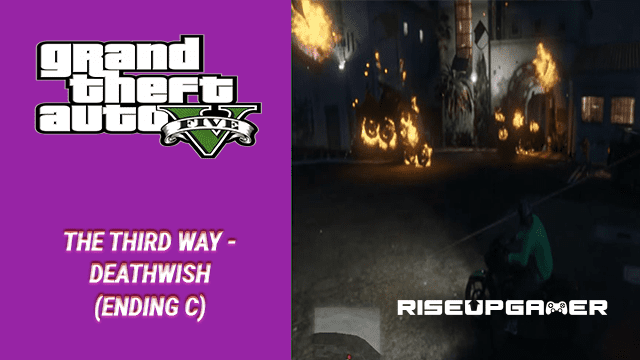 In this guide, we will be looking at how you can finish the third final mission Deathwish, and what it entails in the endgame section of GTA 5.

Choosing the third option, labeled Deathwish, will see the three protagonists work together and solve the dilemma Franklin is currently on.

Instead of putting an end to one of his crime buddies, Franklin aims to save both Michael and Trevor and deal with the rest of their enemies with the help of Lester.

Lester will then brilliantly come up with a plan to lure both the FIB and Merryweather using the gold they collected from the aforementioned Union Depository heist as bait.

The trio will hunker down and defend the factory guns blazing – wiping out the FIB’s strike team and Merryweather’s mercenaries.

After that, the three will then split up to tie up all loose ends.

As soon as the mission starts, drive over to Lester’s home for advice.

Lester will then tell Franklin of his brilliant plan to save both Trevor and Michael while also taking down their enemies for good.

After the cutscene with Lester, get in your vehicle again and pick up Lamar at his house and go to the marked point in the map.

Franklin, Michael, and Trevor will then meet up at the Foundry and discuss their attack formation.

The three will then each take a position in different parts of the room and await their enemy.

Always stay on the cover during the long gunfight encounter. After Franklin springs the ambush, switch to Michael when the game tells you and kill every enemy you see.

As soon as Lamar calls for help, switch back to Franklin, run as fast as you can along the catwalk, drop off the end tail of it, and head out the door through the control office.

GTA 5: Something Sensible (Ending A)

Make your way outside while taking cover and shooting. Use a rocket launcher to take down the incoming enemy cars.

When Trevor goes unexpectedly quiet, switch control to Michael and clear all enemies in the room. Take cover next to Trevor hiding in the control room.

Fight off yet another wave of enemies with Trevor and then switch control to him to clear out the rest of the enemies indoors.

Once the room is cleared, switch back to Michael and gun down all the enemies that emerge at the other side of the foundry.

After clearing that side of the foundry, meet up with Franklin and Trevor to assist them in eliminating the rest of the FIB.

After the long firefight, move to the waypoint marker to trigger a cutscene.

The cutscene will see the trio agree to split up and tie up all loose ends. Franklin is tasked to finish off the Chinese mob boss, Michael agrees to kill Stretch, while Trevor is set to kill both Devin Weston and Steve Haines.

After the cutscene, remember to restock ammo and body armor. Purchase sticky bombs as well. You need them to get the Gold Medal for this particular mission.

After that, drive to the waypoint marked on your map as Franklin.

This will lead you to the country club to find Mr.Cheng entering his limo followed closely by two bodyguard cars.

Get close to Mr. Cheng’s limo and accurately toss a sticky bomb at it. Once one of the bombs sticks, detonate it to achieve the Gold Medal requirement: Stick, Tick…Boom!

Escape the scene swiftly after Mr. Cheng explodes. Switch to Michael once in the clear.

As soon as Michael arrives at his destination next to the basketball courts where Stretch is, exit the car and equip a melee weapon.

To get the Gold Medal requirement: Stretched Out, you need to get close to Stretch and take him out using a melee weapon.

This can either be a hammer, nightstick, knife, or hatchet.

Stretch is the one wearing a white shirt that will shoot a gun at you.

Once Stretch is dead, you can either stay in the area and gun down the responding Balla members or escape the scene by quickly driving away.

Switch to Trevor next after that.

When Trevor arrives at the Del Perro Pier, stop halfway through and park in the lot just behind the Ferris wheel.

Get a good position where you can quietly snipe Steve Haines who is currently riding the Ferris wheel.

Keep a good distance away from the Ferris wheel and watch for Steve to move directly in your line of sight. Take him out with a single shot to the head to get the Lead Lobotomy Gold Requirement.

With Steve down for the count, quickly leave the area and lose the wanted star that you may get to proceed to the final assassination.

After that, head toward Devin Weston’s home and gear up for a big shootout against the Merryweather mercenaries.

You can either proceed guns blazing or sneakily. Both approaches will have no effect on you getting the Gold Medal.

When the area is clear, go to the large basket at the lower balcony to find Devin hiding cowardly inside.

You would then put Devin in the trunk of a car. Drive to the final waypoint to trigger the ending cutscene.

All you have to do now is to push the car to the edge of the cliff. After that, the ending credits will play, thus, ending GTA 5.

Stick, Tick…Boom!: Kill Mr. Cheng using a sticky bomb. Get close to the Chinese mob boss’ limo and chuck some sticky bombs at it.

Stretched Out: Finish off Stretch using a melee weapon. Immediately equip a weapon once you arrive at the basketball court where Stretch is at.

Lead Lobotomy: Kill Steve Haines with a single headshot using a silenced sniper rifle. Get a good position near the Ferris wheel and wait for the right opportunity to get a good shot at him.

There you have it! The Deathwish mission is the proverbial ‘good ending’ in GTA 5. After all, the three protagonists are alive and have effectively put an end to all of their enemies.