The trio rob a bank in Paleto Bay. 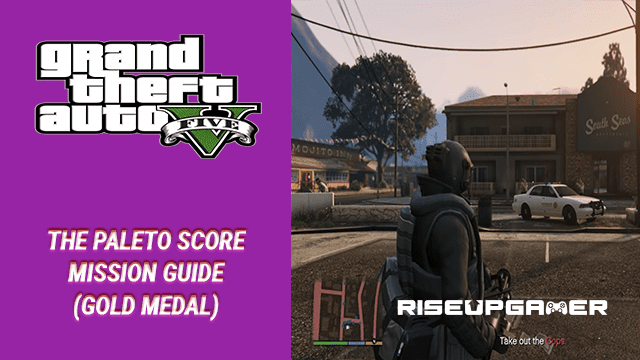 Michael, Trevor and Franklin finally enact the heist they’ve been planning for. They’re gonna need the money for whatever FIB operation they have to do next and so failing is not an option.

This mission involves a heavy amount of action with heavy weaponry and waves of police and army soldiers coming after you. Here is everything you need to know about The Paleto Score mission and how to get its Gold Medal in GTA 5.

The chapter starts off with a loud argument between Michael and Trevor. Once that is out of their system, you will take control of Michael and drive everyone in a van heading to the pier.

Franklin will get off here and prepare the getaway.

Next you will have to drive near to the bank entrance. Michael, Trevor and the gunman you chose in the previous mission will now begin the bank robbery.

Trevor will keep the civilians occupied while your gunman will begin welding on the door to the safe. Eventually it will be ready and Michael will kick the door down. Police will arrive and Trevor will send out warning shots, you will now be in control of Trevor.

Trevor, Michael and your gunman will now walk out of the bank fully clad in armor and heavy weaponry. Take this time to unleash as much chaos as possible as you want to fire out 4000 bullets and deal a million dollars in damage to your surroundings for the Gold Medal of this mission.

Rain bullets on the cop cars that arrive to make them explode and kill enemies that are near them. You can also shoot the nearby gas station to make it explode. There will also be a helicopter circling the skies that you can shoot down.

Walk away from the bank and cross into the building in front of it. The heavy armor and weapons make your characters quite immobile and so you will have to shoot the fence in front of you down in order to continue.

Keep on with your onslaught while waiting for Franklin to come up with a getaway vehicle. Meanwhile, the army is getting involved in this and sends in a tank through a chopper. You will then be switched to Franklin at the construction site.

He will be driving a digger that he will be using to pick up Trevor and Michael with. You will be assaulted by the army while driving to their location, you have no way of fighting back however so just ignore them and keep driving. You can also ram any cars in your way if you want.

You will have to drive the three of them to the factory. You can head inside and regroup. Franklin will be the only one without any heavy armor and is the one most vulnerable. It’s advised to take control of Michael during this section as his power will be useful.

This is a chicken factory that will be filled with army soldiers. You will have to clear them out as you pass through, Michael’s special power is especially useful to shoot down soldiers in tight spaces like this.

The factory is right next to some train tracks meaning you can possibly use a train to get away from the area. Continue fighting your way through the factory until you reach the train and a cutscene occurs where the trio jumps on the train.

The train eventually stops and the trio meets with their government contract to hand the money over to. After that cutscene, everyone will split up and the mission will end.