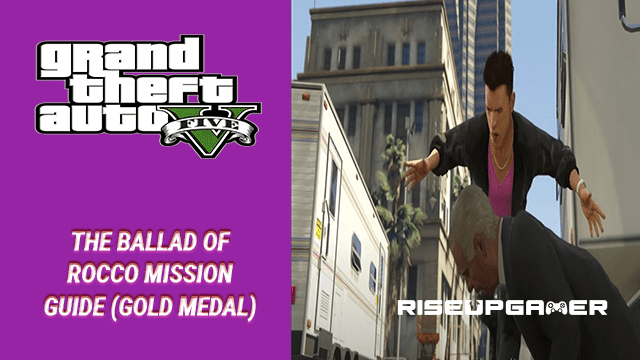 Rocco Pelosi continues to be a pest on the side of Michael and his friend Solomon Richards. This time, however, he sees him getting physical with old man Solomon. Wanting to get rid of Rocco for good, Solomon asks Michael to chase him down and deal with him once and for all.

In this guide, we will be showing you how to finish the Ballad of Rocco mission in GTA 5 and how to get its Gold Medal completion.

Michael arrives at Richards Majestic Productions to meet up with his friend, Solomon Richards.

Thankfully for the old guy, Michael arrives in time to save him from Rocco Pelosi and his accomplice, Gianni, who is currently attacking him for apparently breaching a deal.

As you may recall, Michael already put a beatdown on Rocco when Solomon asked him to convince the director and one of the main actors for his movie, Meltdown.

As soon as Michael arrives, Rocco and Gianni get in their getaway car.

Michael quickly checks up on Solomon and sees that he’s alright. Enraged by what happened, Solomon asks Michael to chase down the two goons and deal with them for good.

This officially starts the Ballad of Rocco Mission.

The Ballad of Rocco Mission Guide

After the opening cutscene with Solomon, Rocco, and Gianni, quickly get in the Gallivanter Baller in the movie set’s parking area.

Chase down Rocco and Gianni as they drive off. Stay close to them as much as possible.

Once you get a clear shot, start shooting at Rocco and his associate.

After killing them both, leave the area as quickly as possible.

As soon as he’s in the clear, Michael will give Solomon Richards a call. You can either accept his invitation or decline it.

If you choose to accept Solomon’s invitation, the game will prompt you to go to his office. It will be marked on your map in yellow.

After arriving, the ending cutscene of the mission should trigger.

The mission will officially end after Michael gives his wife, Amanda, a call to fill her in on the good news.

Mission Time: complete the mission within 3 minutes. Skip all cutscenes if you want and do your best to get rid of both Rocco and Gianni as quickly as you can.

That’s it! The only thing that matters here is how quickly you finish the mission itself. Follow the steps we showed above and you should have that Gold Medal in the bag!