GTA 5: Something Sensible (Ending A)

Franklin puts an end to the ‘craziness’ in his life! 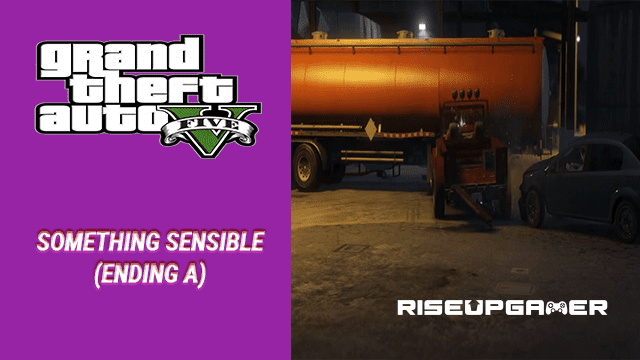 In this guide, we will be looking at how you can finish the final mission Something Sensible, and what it entails in the endgame section of GTA 5.

Something Sensible (Ending A) – GTA 5

Choosing the Something Sensible finale mission will see Franklin meet up with Trevor in the guise of discussing the issues between him, Michael, and Trevor.

In reality, Franklin is gearing up to end his comrade for being the ‘crazy one’ and the most likely to get all three of them killed.

As one might have expected, things didn’t go swimmingly with Trevor, and soon enough the matter escalated to the point that Franklin points a gun at him.

However, before anything could happen, Trevor runs off in his truck. Franklin then follows him, thus, starting the final mission Something Sensible.

After choosing to kill Trevor in the finale mission’s opening cutscene, wait for Franklin to set up a meeting with Trevor in a secluded area and to inform Michael of what he intends to do.

Once that’s done, drive towards the marker on the map to meet with Trevor. It is recommended that you bring with you a fast maneuverable car.

After the cutscene with Trevor, quickly hop into your car and follow Trevor. Do not bother stopping him as the chase sequence will stop at a predefined moment.

Once you reach the oil field, another cutscene will kick in. Michael will arrive at the scene and ram his vehicle into Trevor’s truck causing him to crash into a large gas tanker.

All you have to do now is to end Trevor once and for all. Aim your weapon at the standing fuel and ignite it with one shot. This will burn Trevor alive.

If you refuse to act immediately, Michael will do the deed himself.

This will end the final mission Something Sensible. Take note that choosing this mission means that Trevor will no longer be a playable character in GTA 5’s endgame section.

Michael and Franklin will then part ways kicking off the ending credits of the game.