Michael, Trevor and Franklin take out some of the O'Neil brothers. 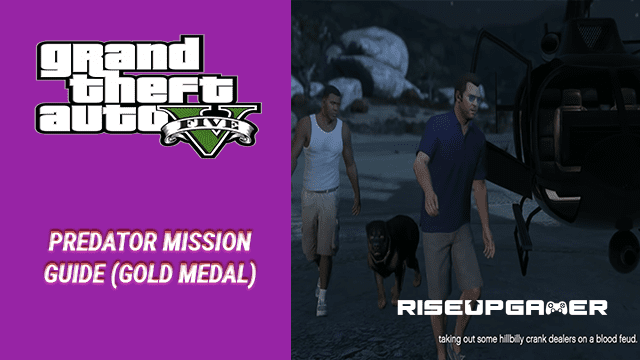 Franklin contacts Trevor about a few rednecks that are out hunting him down.  Trevor responds that they’ve wronged him in the past and are continuing to harass him, but a skeptic Michael knows better.

This mission will require a keen eye as you will have to snipe three targets while avoiding to shoot the wildlife. Here is everything you need to know about the Predator mission and how to get its Gold Medal in GTA 5.

The playable portion of the mission starts with Franklin and Chop following three of the O’Neil brothers in their car.

You will take control of Franklin and have to continue tailing the brothers while waiting for Trevor and Michael to arrive.

The brothers will grow more desperate and go through steeper and more dangerous off roads. They will eventually fly off a cliff due to a near miss with an elk. They will crash into the base of the cliff but will survive.

They will proceed to exit the vehicle and will each run off into different directions.

Franklin will report this development to Trevor and you will then switch to controlling Trevor who is on his way to the Sandy Shores Airfield.

Trevor’s business helicopter will be there waiting. Transfer from the car to the chopper and head to Franklin’s location.

Once you arrive, Trevor will give Michael a gun fitted with a special scope that allows you to see heat signatures. There will be many animals in the forest and will make it a little difficult to find all three O’Neil brothers in the chaos.

Zoom in to see a clearer picture of the target. Human targets will of course be standing on two legs and is your main way of distinguishing them from the other animals.

One of them can be found in the center of the forest, while another can be found swimming in the river to the left.

Make sure to aim carefully as you need to kill all three brothers with a headshot to get the Gold Medal for this mission. You also must avoid killing any animals.

The last brother will have some fight in him as he is hiding behind a rock and will shoot rockets at the helicopter.

This causes difficulties for Michael and Trevor and so you will have to hunt the last brother down by switching to Franklin.

Chop will pick up the target’s trail, all you have to do is follow him. The last brother will be too preoccupied with shooting the helicopter that he won’t notice you. You can use this to line a headshot on him.

Control will now transfer back to Trevor. Head down to pick up Franklin on the ground and fly everyone back to the Sandy Shores Airfield.

On their way there, Trevor will reveal the reason why the O’Neils want him dead, most likely it was in revenge for their brethren.

The trio celebrates their victory and Franklin and Michael head back home. The mission ends as they drive away and Trevor is left standing alone.