GTA 5 Online: How To Unlock K-Rose & Statue Of Happiness T-Shirt

Grab these rare T-Shirts for free while you can! 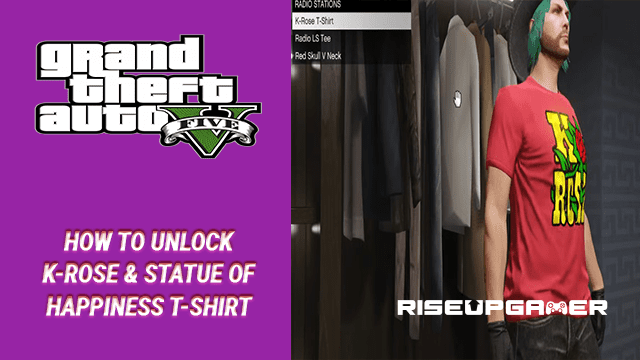 Rockstar has been constantly adding tons of new content to Grand Theft Auto Online including stuff like accessories such as new outfits, shoes and bags to help your character stand apart from the crowd.

The latest addition to the list of outfits is the new K-Rose and Statue of Happiness T-Shirts. These are one of the 16 rare shirts that were quite difficult to get easily until this week and now they are available for free.

This guide will tell you how to get the rare K-Rose and Statue of Happiness T-Shirts in the game.

As a part of the 25-year anniversary of Grand Theft Auto games, Rockstar has decided to give away these two T-shirts as a reward to players.

Finding these rare T-Shirts was quite a challenge before and now they can be easily grabbed by simply logging in to the game from November 10 to November 16 2022.

The first is the Statue of Happiness shirt which is a black-coloured shirt with the Statue of Liberty printed on it and a text that says “Happiness is…”.

ALSO READ: GTA 5 Online: How To Get Green Joggers

This T-Shirt pays homage to the iconic Statue of Liberty that can be found in prior GTA games such as Grand Theft Auto 4 which was a symbol of the American Dream for immigrants like Niko Bellic.

You can collect this shirt by going into your Wardrobe and accessing the Tops→Special Tops→Brands section where you will find it.

The second T-Shirt is the bright and flashy K-Rose one that has K-Rose written in yellow text with a red rose in the middle.

This shirt is a reference to the popular GTA San Andreas radio station called K-Rose which was widely known for its old country songs from classic singers such as Eddie Rabbitt and The Desert Rose Band. You can equip the shirt by going into your wardrobe and heading into the Tops→Special Tops→Radio Stations section.

That’s it, now go ahead and grab these rare T-shirts that celebrate the history of the iconic GTA games for free while you can!