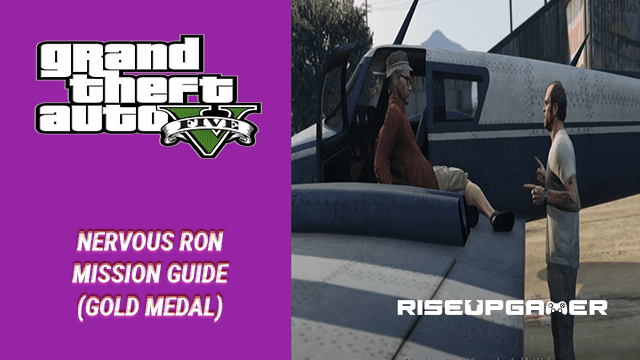 In the Nervous Ron mission, Trevor and his always-nervous friend, Ron, are set to take out Lost MC members at the Sandy Shores Airfield so he can take the Lost MC’s weapons business for himself.  True to his personality, Trevor just goes and does everything it takes just to get things in his way.

In this guide, we will be showing you how to complete the Nervous Ron mission and get its Gold Medal completion.

Ron shows Trevor the damage his trailer home sustained after the Lost MC retaliated for what he did to their leader Johnny Klebitz on a previous mission.

Agitated, Trevor looks to strike back. But before he could do just that, Wade shows up at the trailer. He hesitantly approached Trevor to report the leads he found on finding Michael.

After that, Trevor heads to the nearby gun store to pick up a sniper rifle he intends to use to put a halt on the weapon shipment that the Lost MC is conducting.

As one would expect from any mission concerning Trevor, everything turns chaotic real fast. Dozens of bodies will fall and tons of bullets will be fired.

Soon enough the two would steal planes from the hangars nearby along with the weapons the Lost MC were shipping.

The pair would then fly toward the buyer’s location to drop off the weapons, thus, completing the deal for themselves.

After the mission’s opening cutscene, get on the ATV and drive to the nearest gun store.

There, purchase a suppressor and advanced scope for the sniper rifle you would use to disrupt the Lost MC’s dealings.

Now, get back on the ATV and meet up with Ron at the target location.

There, climb up to the top of the water tower. Focus the sniper scope on Ron as he makes his way inside.

While Ron is on his way to the target location, start killing off the guards you see. Remember to aim for their heads since you would need five headshot kills to get the Gold Medal.

After killing the guard near the stairs, shoot down the lights on top of him.

Do not shoot at the incoming van just yet. Wait for the driver to leave the vehicle first before doing so.

After that, move your crosshair to the control tower. A Lost MC member should come out and hang about on the balcony. Take him out by aiming at his head.

Quickly move your crosshair back to the stairs where you killed the first guard. Another Lost MC member should roam around there.

Kill him as well before shifting your aim back to the control tower.

Yet another Lost MC member should come out of the control tower. Kill him before he discovers the body of the previous guard you shot there.

After that, aim your crosshair back at Ron.

Before Ron gets close to the tanker, kill the Lost MC member standing by. Keep your crosshair in the exact location as another one will come out from the same building nearby.

A lost MC biker will then pop out from the right side. Take him out before he gets to Ron.

Soon enough, a helicopter should arrive at the scene as well. Aim at the pilot and take him down.

As soon as you kill the helicopter’s pilot, the other Lost MC members in the area will be alerted of your presence. Take them out head-on.

Make your way to the plane marked on your map while taking down everyone trying to stop you.

By this point, Trevor should be hanging on the right wing of the plane Ron is currently piloting.

Remember to kill every Lost MC member that comes your way while you hang about on the plane’s wing. This is a crucial part of your quest to get the Gold Medal.

Ron will then lead you to another plane that you need to pilot.

Follow Ron and go to the sea where you will drop off the weapons shipment.

Keep low and fly under all six bridges. Again, this is crucial for you to get the Gold Medal.

After that, simply follow the smoke trail to arrive at the target location.

Drop off the cargo near the boats then fly back to the airstrip.

Do your best to arrive on the airstrip before Ron does. Doing so will complete the Nervous Twitch Gold Medal requirement.

After successfully landing on the airstrip, the mission should promptly end.

Headshots: kill at least five enemies with a headshot. On the sniping section of the mission, make sure that you aim all your shots at the enemies’ heads.

Mission Time: complete the mission within 12:30. Skip every cutscene to significantly cut down on your total mission time.

Nervous Twitch: win the race to the airstrip against Ron. Pretty straightforward – just fly faster and land your plane carefully at the airstrip destination before Ron.

6 Bridges, 1 Plane: fly under any six bridges along the flight path. Remember to fly low but still in control.

Death on a Wing: kill all Lost MC members chasing you while lying prone on the right wing of the plane Ron is piloting.

There you have it! Do all the steps we mentioned above and you should get that Gold Medal in no time!