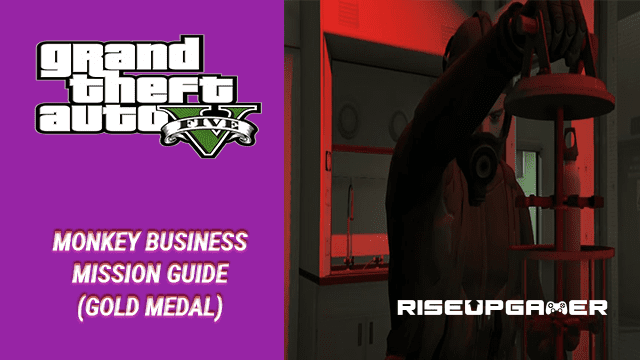 Michael, Franklin, and Trevor are again forced to team up to do the job for their FIB friends Steve Haines and Dave Norton. This time, they must retrieve a deadly nerve toxin before a supposed terrorist can use it in one of his bombs.

In this guide, we will be showing you how to complete the Monkey Business mission in GTA 5 and how to get its Gold Medal completion.

Michael, Franklin, and Trevor meet with FIB agents Steve Haines and Dave Norton at Cape Catfish for a very important mission. They must retrieve a deadly nerve toxin before terrorists can get a hold of it.

Due to the degree of importance of the mission, Steve was surprised to see that only the three showed up at the supposed meeting. They were expecting six men to do the job.

Michael then tells Steve that nobody told him to bring extra men, and quickly confusion and argument ensued.

After a heated back and forth, Trevor proposes for Steve and Dave to just join in on the mission themselves if it is that important to them.

The two FIB agents reluctantly agreed and briefed the team on how the job should play out.

After the opening cutscene, drive using the Dinghy to the target location marked on your map.

Upon arriving at the destination point, dive into the water and follow Dave and Steve.

Shortly, you would then be tasked with opening some metal bars to proceed further. Try your best to aim at the green markers to break the bars as quickly as you can.

With that done, swim through the tunnel and towards the lab.

After climbing up the yellow stairs to reach the lab, stun the first scientist you see using the Stun gun.

You would need to stun at least eight enemies to complete one Gold Medal requirement.

Now, make your way through the lab with Steve and Dave. Make sure that you only use your Stun gun to get the Gold Medal.

Make your way to the elevator. Stun the scientist inside it then take his green card.

Immediately after exiting the elevator, enter the room in front of you. Stun the scientists you see.

Take cover right after so you don’t immediately alert the incoming guards. Once their backs are turned, use your Stun gun to incapacitate them as well. Proceed.

Now, wait for the scientist to open the door to the red room. Taze him as soon as he goes outside the room to ensure that you get the Gold Medal.

Take the nerve toxin inside the room. Now you must make your way outside the lab.

By this point, you should have stunned at least 8 enemies ensuring one of the Gold Medal requirements. Feel free, to switch weapons now to make the following encounter much easier.

Make your way out of the lab now while fighting off incoming enemies. Focus on getting as many headshots as you can. Make sure that you take advantage of Michael’s special ability.

Once you are out, put the nerve toxin in the refrigeration unit as the game prompts you.

The perspective should then immediately switch to Trevor.

Fly towards Michael, Dave, and Steve. Take the crate and fly it back to the airfield as marked on your map. Be careful not to crash the helicopter.

Carefully land the crate on the trailer.

After that, land the helicopter safely on the yellow marker shown on your map. This will trigger the next cutscene.

The mission ends after Trevor parts with Patricia.

Stunner: stun at least 8 enemies using the Stun gun. Use the stun gun throughout your infiltration of the lab. Only switch to normal guns after retrieving the toxin.

Headshots: kill at least 15 enemies with a headshot. Make use of Michael’s special ability as much as possible.

Mission Time: finish the mission within or under 13:30. Skip all cutscenes if you wish.

There you have it! Follow the steps we laid out above and you should get that Gold Medal in no time!