Trevor tries to steal a cargo plane full of weapons. 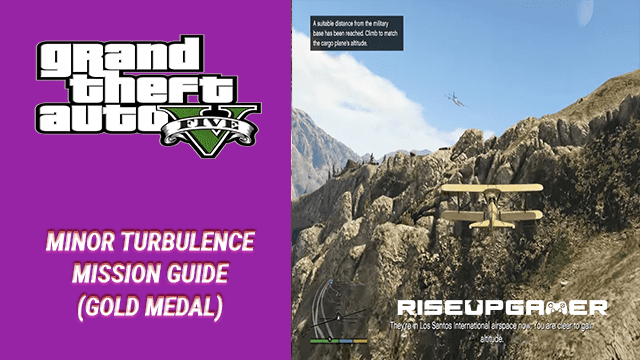 After a falling out with Martin Madrazo, Trevor and Michael are laying low. During this time, Trevor’s friend Ron mentions a possible good score involving a Merryweather cargo plane.

This mission will have some action and a lot of flying that will put your pilot skills to the test. Here is everything you need to know about the Minor Turbulence mission and how to get its Gold Medal in GTA 5.

The mission starts with Franklin looking for Michael at his house. He will call Michael and will be updated with the events of the last mission. There will more cutscenes with Trevor and Michael’s current situation.

Eventually you will be in control of Trevor. Get in the car with Ron and head to the McKenzie Airfield to board a plane. Trevor will complain that they’re using a flimsy crop duster for this mission, but they will have to make do with what they have.

Get on the crop duster and fly off into the direction of the cargo plane. The Merryweather plane will be found to the west. You will have to tail it until you get close enough.

It is advised to stay close to the ground as heading too high up in the sky will arouse suspicion from the plane and other local authorities.

During your pursuit, you will eventually reach Fort Zacundo. Ron will contact Trevor over the radio advising him to circle around as it’s dangerous to try to fly over the airbase.

Follow Ron’s instructions and circle around the base while keeping track of the cargo plane.

Once you are a good distance from the airbase, you will be able to go to higher altitudes without raising suspicion as this is now considered international airspace.

You will have to get close enough to ram the crop duster to the rear of the plane.

Once inside, there will be a few enemies that you will have to shoot down.  You can use the boxes and vehicles here for cover.

Head through the hallway and up the ladder. The final enemy you have to confront will be the pilot. Shoot him down and you will now be in control of the plane.

The initial objective will be to bring back the plane to the Mckenzie Airfield, but you will be interrupted by a couple of fighter jets. They will demand that the plane be returned to base and that they will attack if the plane does not change course.

Of course, Trevor does not comply which leads them to shooting missiles at the plane and taking out the engines. This will cause the plane to start plummeting to the ground.

Trevor will have to evacuate the plane with a parachute. You can exit the plane while driving a Mesa truck for style points and the Gold Medal objective.

You can exit the truck while free falling to the ground.

Safely land with your parachute as you see the cargo plane crash into the ocean.  The mission ends once Trevor reaches the ground and walks away.