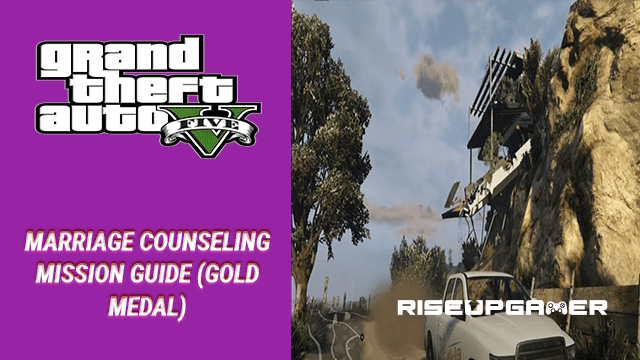 As much as Michael tries to get his life now in order and away from the crimes he once has done, it just gets back at him time and time again. His venture back to his old life of crime started when he came home one day and finds his wife, Amanda, sleeping with his tennis coach in their own home. You, the player, get to experience this fallout in the mission Marriage Counseling in GTA V.

In this guide, we will be showing you how to finish the Marriage Counseling mission and get its Gold Medal completion in-game.

Michael gets home one day seemingly without a single soul in his luxurious Rockford Hills residence. He then tries to call his wife and daughter but gets no response from them.

Frustrated, Michael decides to puff out smoke and proceeds out of the front door. As soon as he steps outside and begins lighting his cigarette, he sees two tennis rackets beside the front door.

Thinking that his wife is again cheating on him, Michael rushes to his bedroom to see what’s up with Amanda and her tennis coach.

Sure enough, Michael’s suspicions were right as he finds Amanda outside their bedroom door with nothing on but a towel.

Michael chases the tennis coach as he jumps out of the balcony window to get as far away as he can from Michael.

Michael is now enraged and sees nothing but red. He wants his hands on this man and nothing is stopping him now.

As soon as he steps outside, however, he bumps into Franklin who just so happens to visit. Since Michael doesn’t have the time right now to chat peacefully, he opts to bring Franklin along with his plan.

As soon as the opening cutscene ends, get in the truck parked in front of Michael’s home and chase down the tennis coach.

Although driving fast, make sure to avoid crashing as much as you can. This plays a huge role in gaining the Gold Medal completion for this particular mission.

Just follow the yellow marker on the map as you drive.

The chase should end in a luxurious home on the canyon in Vinewood. A cutscene should play where Michael would then decide to pull the whole house down using his truck.

You may want to skip this particular cutscene as getting the Gold Medal requires you to finish the whole mission in less than 5mins and 30secs.

As soon as the cutscene ends, go back to the truck and begin pulling the house down.

Hold the Accelerate button until the deck of the house collapses, granting Michael his payback to the douchebag tennis coach.

After that, make your way back to Michael’s home as fast as you can without bumping into anything.

Along the way, Martin Madrazo’s assistant should give Michael a call. Prepare for the worst as soon as you arrive home.

Soon enough, Madrazo should have some men chase you.

Stop the truck for a bit and shoot them down while still inside the car. This is crucial to achieving the Gold Medal.

Continue making your way back to Michael’s house now. The ending cutscene should play out. Feel free to skip it if you think you won’t make the 5:30 mark if you let it play out.

Not a Scratch: complete the mission with minimal damage to Michael’s truck.

This one can be a bit challenging seeing as you would have to drive fast without bumping too much into anything and then defend yourself from Madrazo’s men later on. Just try your best not to incur that much damage to the truck.

Mission Time: complete the mission within 5:30. Skip all cutscenes if you want to fulfill this requirement. It’s just a straightforward mission time limit.

Drive-by Killer: kill three of Madrazo’s men while in a vehicle. As soon as Madrazo’s men get near. Stop for a bit and shoot them off as fast as you can to avoid too much damage.

There you go! Just follow the steps shown above and you should get the Gold Medal completion for Marriage Counseling.

We recommend that you first play the mission regularly, without skipping any cutscenes, as this mission serves as a major point in Michael’s return to the crime life.