Michael saves the movie he worked hard on. 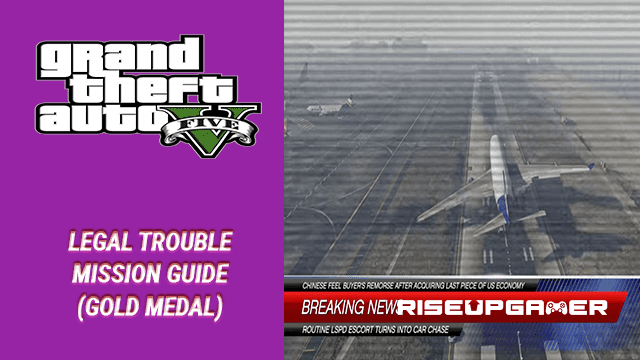 Michael is overjoyed with becoming a movie producer, but that is ruined by the arrival of Molly and Devin. They want to cancel the movie in order to cash in on some insurance.

This mission will involve a long chase scene both with a car and on foot.

Here is everything you need to know about the Legal Trouble mission and how to get its Gold Medal in GTA 5.

Molly and Devin are in Solomon’s office and they tell Michael that their film “Meltdown” is getting canceled in order to cash in on a big insurance payout. Molly takes the film from Solomon and leaves in order to destroy it.

Michael, finally happy about getting to be a movie producer, does not take this sitting down and chases after molly.

Run out of Solomon’s office and grab a car. You will have to head to Los Santos Airport in order to catch up to Molly. Make sure to reach top speed with your car during any point of the mission as that is a Gold Medal Objective.

There will be a chase sequence at the airport’s tarmac. Make sure to avoid the police cars and airplane turbines in your way.

You can switch view to the helicopter Weazel newscast during this chase sequence to get a better view. Do so for an accumulated time of 15 seconds in order to get the Gold Medal for this mission.

She will eventually run into a large hangar and meet a grisly accident involving some wind turbines. Grab the film reel on the floor and run away. You can hijack the nearby small planes in this hanger for an easier get away.

You can choose any direction to go to as long as you manage to get rid of your wanted level.

Doing so within two minutes after beginning the chase scene will earn you the Gold Medal. After you lose the wanted level the mission will instantly end.