The trio steals a couple of cars for Devin. 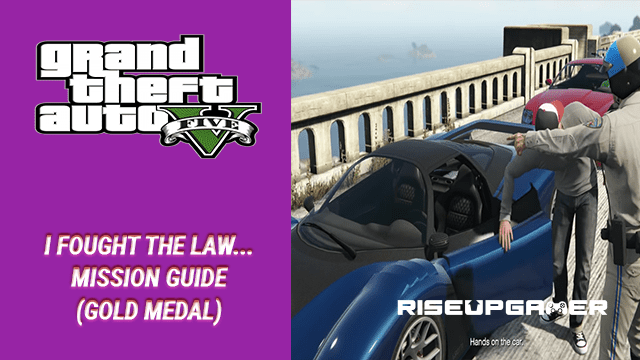 Devin Weston hires Michael, Trevor and Franklin to steal a couple of cars from his “friends” so that he can make some money reselling them.

This mission involves a lot of fast cars and racing, make sure to use Franklin’s special power to get a leg up in the race. Here is everything you need to know about the I Fought the Law… mission and how to get its Gold Medal in GTA 5.

The mission starts with the trio meeting up with Devin Weston at a construction site. He wants them to steal some cars from his rich friends so that he can resell them for a profit in Asia.

You will begin being in control of Franklin. Head in the car in front of you and use it to go to the gas station.

Upon arrival, Franklin will see the two guys who own the cars they are looking for and taunt the two of them into a race.

Do your best to keep on the other two cars’ tails and maybe even use Franklin’s special power to gain an advantage.

Eventually you will approach the area where Trevor and Michael are lying in wait, disguised as cops.

You will have to chase after the two cars and have them pull over.

Follow Trevor through the tunnel on the left if you want the Gold Medal. Keep following the two cars.

Trevor will occasionally shout at them to stop and will eventually get them to pull over by the bridge.

After a brief interrogation, Michael and Trevor will push the drivers out of their cars and steal their vehicles. You will now have to head to Hayes Auto on Little Big Horn in south Los Santos.

You can take your time or be a little reckless during this section as there is no time limit or requirement to deliver the cars in good condition.

Devin will be waiting for you there and will talk to the trio about the job. He will talk about the next car to steal and the mission ends with him leaving with Franklin and Trevor and Michael staying behind.