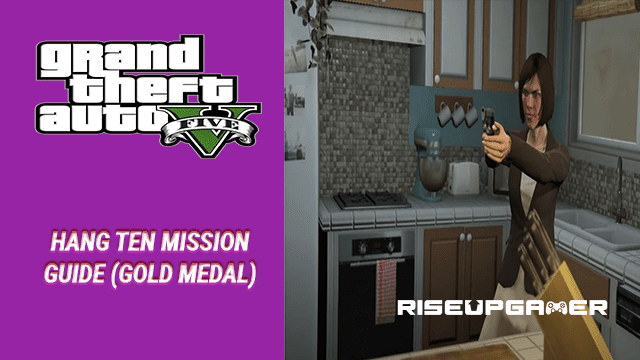 The Hang Ten mission is the shortest in GTA 5. While short, it contains a lot of story content that is worth viewing and is ultimately important to fully understand the story of the game. Ultimately, this mission shows the players how devious Trevor can be just to achieve what he wants.

In this guide, we will be showing you how to complete the Hang Ten mission on GTA 5 and get its Gold Medal completion.

As you may remember, Trevor forced himself into Floyd’s apartment to live in Los Santos proper.

While disapproving of Trevor’s way and his sudden insertion into their lives, Floyd ultimately failed to put up a fight, until now.

After going home to Floyd’s apartment, Trevor was surprised to see the man himself confront him by the entrance door.

Turns out, Floyd’s girl Debra is back and he wants Trevor out of their lives before anything bad could happen to her too.

Needless to say, the confrontation did not go well.

The three got into a heated argument and, unfortunately, things turned bloody real quick.

The mission is just a long cutscene. It should start as soon as Trevor arrives at Floyd’s home.

Drama would ensue. The couple will argue with one another about another man Debra is apparently sleeping with.

Stuck in the middle of the argument, Trevor tries to calm the situation but ultimately failed.

Soon enough Debra reaches out for a gun.

Floyd, on the other hand, snaps and reached for the knife on the kitchen counter.

The screen then goes black.

Next thing we know, Trevor is walking out of the apartment covered in blood. The windows too, implying that Debra and Floyd both perished at his hands.

He bumps into Wade on his way down. He stops Wade, Floyd’s cousin, from entering the apartment and tells him that they should go do something fun instead.

After the long, dramatic cutscene, drive to the Strip Club Vanilla Unicorn.

This will now be Trevor’s new home. After arriving, the mission would promptly end.

The mission would end after the perspective of the game transfers to Michael.

Mission Time: complete the mission within or under 4 minutes. We recommend that you first watch the whole cutscene before retrying the mission and skipping everything to get the Gold Medal.

There you have it! As long as you skip the cutscenes, this mission is just a simple drive to the strip club. That being said, we recommend that you at least view it.