Trevor gets a lead on where to find his old pal! 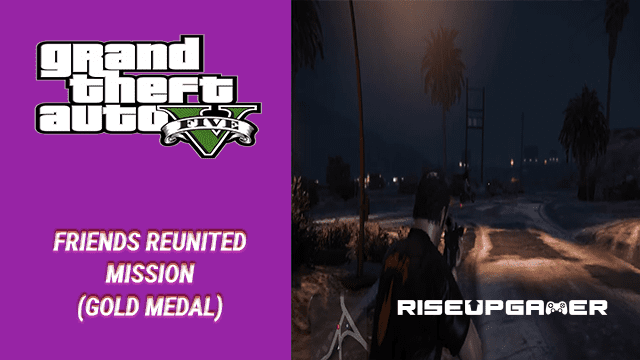 The Friends Reunited mission signals Trevor’s arrival to Los Santos proper to confront his old pal, whom he thought died on their failed heist together years back, Michael. However, before he goes and does that, he leaves an explosive surprise for the Lost MC gang.

In this guide, we will be looking at how you can finish the Friends Reunited mission and get its Gold Medal completion.

Trevor finds Wade in his trailer. Wade, who was tasked by Trevor to find his old pal Michael in Los Santos, tells him that there are only two Michael Townleys in the city.

One is an elderly man and the other is still in kindergarten. Annoyed by his friend’s findings, Trevor snaps at Wade.

However, Wade then tells that he has found someone called Michael De Santa who fits Trevor’s description of his friend. Trevor believes that he is the Michael he’s after.

He then drags Wade to Los Santos and calls Ron to let him know that he will be in charge of Trevor Philips Industries while he’s gone.

But before they do that, Trevor wants to go and pay the Lost MC a final visit first.

After the opening cutscene with Trevor and Wade, drive to the waypoint at the Lost MC trailer park.

Sneak in the dark of the night and place the sticky bombs at each marked trailer. Make sure that no one sees you and raise the alert to get the Gold Medal.

You may also try throwing the sticky bombs at the target trailers instead of getting up to them personally.

Once all five sticky bombs are placed on the five marked trailers, do not detonate them yet.

Sneak up on a few of the lone bikers outside the trailer park and snipe them quietly. You need to get 5 headshots to get the Gold Medal.

After taking down 5 Lost MC members via headshot, detonate the sticky bombs to explode the whole trailer park.

You can then either take down the remaining Lost MC members in the area or just leave altogether with Wade.

With the trailer park destroyed, get back in your vehicle and drive to Los Santos by following the marker on the map.

The waypoint should lead you just above Vinewood Hills where Trevor will make a short pitstop.

After that, drive down to Vespucci Beach and witness Trevor force himself to stay in Wade’s cousin’s home. This completes the mission.

Headshots: get at least 5 enemy headshot kills. Snipe the Lost MC members quietly one by one before detonating the trailer park.

Mystery Gift: destroy the trailers without being detected. Be patient and sneak your way through the trailer park as you plant all five sticky bombs.

Unmarked: complete the mission with minimal damage to health and armor. As long as you stay hidden, you will not incur any substantial damage to fail this requirement.

Perfect Gift: destroy all five target trailers at once. Only detonate the sticky bombs when you have planted all of them already.

There you have it! Follow this guide and you should get that Gold Medal in no time!