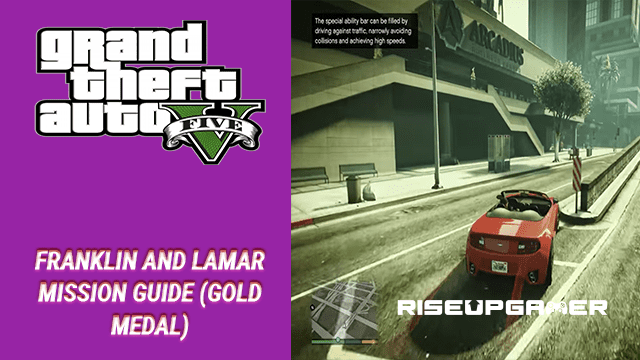 Franklin and Lamar are out to get back a couple of cars. Serving as repo men, they have to travel to the debtor’s house to bring the cars back to their buddy Simeon.

A majority of this mission will involve driving around town. First in a race with Lamar, then getting away from the police and finally driving to return to Franklin’s house.

Here is everything you need to know about the Franklin and Lamar mission and how to get its Gold Medal in GTA 5.

The start of the mission will begin with Michael at therapy and then a few montage shots of the city. Simply let the cutscene play out.

At the start of the playable portion of this mission, you will be in control of Franklin. He and Lamar are here to take back a couple of cars to Simeon’s dealership. You can choose either of the cars here, Lamar will drive the one that you do not choose.

This will begin the driving section of the game. Remember that one of the requirements for the Gold Medal is for the car to have minimal damage, so make sure to drive carefully.

For now, all you have to do is follow Lamar.

While passing through the film studio while following Lamar, make sure to avoid the alien actors on the road for another Gold Medal objective.

Each protagonist of the game has a special ability. Franklin has an ability unique to him where he can slow down time while he is driving any land based vehicle.

Make sure to remember this as another Gold Medal objective is to use his ability for a total of 7 seconds.

Will GTA VI Be Better Than GTA V?

Eventually, Lamar will mention to go left to go through a parking lot.

Instead of listening to him, you can turn left at the next intersection after coming out of the tunnel.

Head past the Arcadius building and into the parking lot across from it. You will then be notified if you’ve won the race with Lamar or not. There will be no time to breathe though, as once Franklin and Lamar finish exchanging words, they will be pursued by the police.

Don’t forget to avoid any damage to the car for the Gold Medal!

Try to lose the cops and stay out of their sight. After a bit of waiting outside of their radar, they should give up the search. Once you’re cleared, head to the yellow marker to meet up with Lamar at Simeon’s dealership.

You will arrive at a scene where Simeon is attempting to sell a car to a man named Jimmy.

You can then head out to the back of the dealership and use Franklin’s car to get to his house.

GTA 5 Online: Where To Find The Metal Detector & Buried Stashes

Once you arrive, Franklin and Lamar will have a brief exchange of words before Lamar goes on his own way.

You can then head inside Franklin’s room to end the mission.