Franklin’s out to steal another car for Devin Weston. 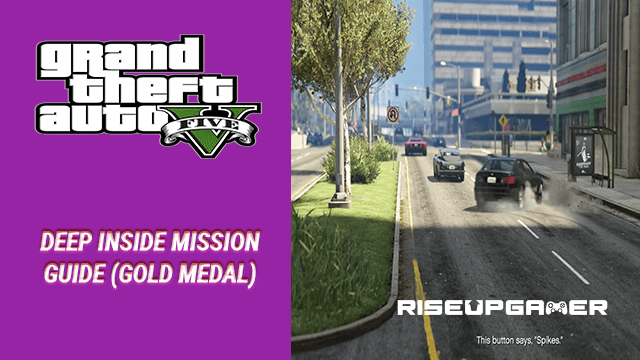 Devin has targeted another car he wants stolen and Franklin is the man for the job.  Franklin will have to go undercover if he wants to get close to the car.

Once he does, he’ll have to get rid of pursuers and his unwanted passenger before driving the car back to Devin’s garage. Here is everything you need to know about the Deep Inside mission and how to get its Gold Medal in GTA 5.

The mission begins once you reach the rear entrance of the Backlot City studio. Franklin will call Molly and say that he is on the location. Molly will tell Franklin to go over the wall and look for the JB 700.

Be wary as only actors and stunt personnel are allowed to approach the JB 700. To make things easier for yourself, you can impersonate an actor to get close.

Run to the left after going over the fence to hear an actor complaining to his assistant. He will tell her off and will be vulnerable to a stealth attack from behind. Do so to claim his costume and claim it as your own.

Continue on to the set to your right and you will easily be able to approach the car without alerting any witnesses. Get in the car and drive off as fast as you can. This would have been a perfect getaway, however you will have a panicked actress sitting in the passenger seat.

On your way out of the studio, you will find the actor whose clothes you stole in the middle of the road. You need to run him over as it is a prerequisite to getting the Gold Medal for this mission. Your next destination is the Hayes Auto shop at south Los Santos.

You will be pursued by some of the studio’s security. Luckily this car is able to deploy spikes that can stop anyone chasing you.

A little while after losing the security, there will be a prompt to press a button. Franklin does not know what it does, but pressing it within 10 seconds of the prompt is a requirement of the Gold Medal.

The button actually activates an ejector seat for the passenger side. This will eject your unwanted guest out of the car and is also needed for the Gold Medal.

Devin Weston will meet you at the Hayes Auto shop. While he and Franklin are talking, there will be an unexpected appearance from Lamar.

Some tension pops up and Franklin convinces Devin to let Lamar handle the theft of the last car. Devin agrees and Franklin walks away, ending the mission.