Michael pretends to be dead to confirm if someone is indeed dead! 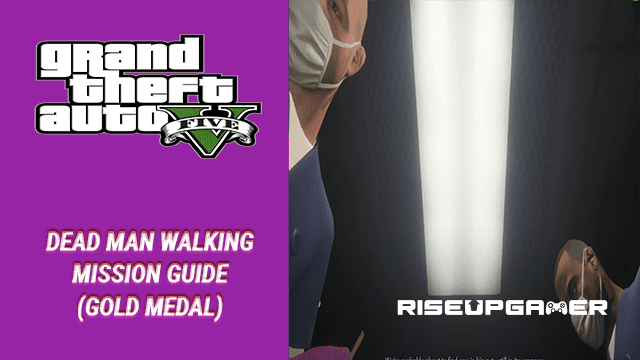 Michael’s past is starting to creep in once again when Dave gives him a call to double-check on the body of an informant named Ferdinand Kerimov, who purportedly has implicating information about the two of them. Michael will then play dead and get a look at this Kerimov’s dead body in the coroner’s office.

In this guide, we will be looking at how you can finish the Dead Man Walking mission in GTA 5 and get its Gold Medal completion.

After Michael’s eventful reunion with Trevor, he gets a call from Dave Norton asking him to meet him in the Galileo Observatory to discuss serious matters.

There, Dave tells Michael that he knows that he is back in the crime business with his recent heist in the Jewelry store with Franklin. At first, Michael denies this but he eventually admits it.

Dave then starts to slowly ask Michael for help to save his career.

Michael knows that he will be in serious trouble if Dave ever loses his job at the FIB so he obliges and asks what Dave needs to be done.

Dave then shows Michael a picture of the guy he wants him to confirm is dead – his name is Ferdinand Kerimov.

While the IAA has declared Kerimov dead, the folks at the FIB think otherwise. Dave believes that this guy has implicating information about the corruption within the FIB and that threatens Dave’s career there and, by extension, Michael’s freedom.

Agreeing to do the job, Michael will now have to check on Kerimov’s body from the coroner’s office himself.

To do that, Dave knocks Michael out and places him in a body bag. Michael wakes up in the coroner’s office, thus, starting the mission officially.

As soon as the coroner’s staff opens the body bag, press the corresponding button prompts to wake Michael up.

You may also want to wait for the staff to complete the assessment of Michael to get a bit of fun dialog. Take note however that one of the Gold Medal requirements for this mission involves how fast you finish it.

With Michael now up and about, sneak your way to the morgue. Take out the guards you see however you like.

In the morgue, you will see two bodies. Go directly to the farthest side of the room to save ample time.

Michael will then give Dave a call. He tells Dave that Kerimov is not in the morgue and is still probably alive. Listen to the instructions he will give to get out of the morgue safely.

Michael now needs to make his way out of the mission while dealing with the agents out to hunt him. Take cover as much as possible to not take too much damage.

Remember to use Michael’s special ability to slow time in gunfights and aim at your enemies’ heads to complete one of the Gold Medal requirements.

After getting to the third floor, make your way to the marked area on your map.

There, break the window using your gun to escape the coroner’s office.

Take a car in the parking lot and drive off. Lose the cops and the wanted star level to proceed to the next section of the mission.

With the cops gone, Michael will call Franklin to meet up at the oil derricks. Just follow the yellow marker on your map.

After arriving, a short cutscene with Franklin should trigger, thus, ending the mission.

Accuracy: finish the mission with a shooting accuracy of at least 70%. Take advantage of Michael’s special ability and make every shot count.

Headshots: kill at least 14 enemies with a headshot. Always aim for the enemy’s head – spam Michael’s special ability if necessary.

Mission Time: complete the mission within or under 9:30. Skip all the cutscenes to save ample time. Take the rear exit of the coroner’s office to evade the responding LSPD.

Unmarked: complete the mission with minimal damage to health and armor. Always be on the cover.

There you have it! Follow the steps we listed above and soon enough you should get that Gold Medal!