Trevor takes down the competitors…literally! 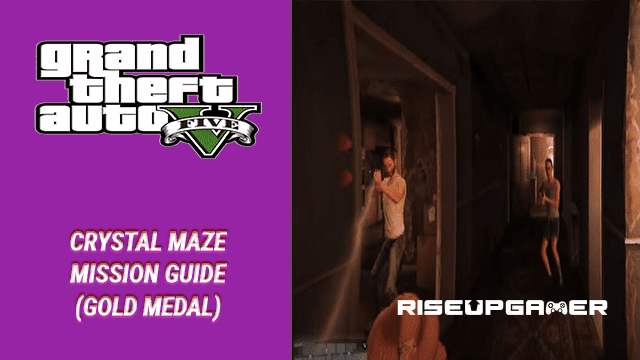 Trevor is a man who is more than willing to do everything it takes to make things go his way, especially when it involves making cash. This mission tackles the continuation of Trevor’s business venture with Tao Cheng, the heir to the Los Santos Triad. And as one would expect from a mission involving the lunatic Trevor, this one is full of craziness and explosions to boot.

In this guide, we will be showing you how to complete the mission Crystal Maze in GTA 5 and how to get its Gold Medal completion.

After the fiasco that involves the Aztecas attacking Trevor Philips Industries, Trevor returns to the Yellow Jack Inn to convince Tao Cheng and his interpreter to pick up where they left off with the deal.

Cheng is, once again, high as hell, while the interpreter is still understandably pissed off with Trevor.

The interpreter declines Trevor’s proposal. He says that they are now actively pursuing other opportunities.

Desperate to get his business venture to the next level, Trevor unexpectedly begs Tao Cheng’s interpreter to give him the deal he wishes. Unfortunately, the interpreter stands firm.

Trevor then snaps. He forces Tao Cheng and his interpreter to tell him who they are working with to decline his humble offer.

After slamming his client’s head against a wood post, the interpreter budges and tells him the truth.

Fearing what Trevor may do further, the interpreter reveals that they have decided to work with the O’Neil brothers instead.

Enraged and seeing nothing but blood, Trevor rushes to the O’Neil ranch, starting the explosive mission.

After the encounter with Cheng and his interpreter at the Yellow Jack Inn, hop onto your vehicle to the O’Neil brothers’ farm.

Follow the yellow marked point on your map to get to the vantage point at the top of the hill.

There, scout the area using a sniper rifle. Plan your next move as everyone will start to scramble once you fire the first shot.

Take note that you need to get at least 10 headshot kills to get the Gold Medal for this mission. On top of that, you also have to kill two enemies with one shot.

You can do the latter by waiting for the brothers on the balcony to line up perfectly as they chat. It is recommended that you make this your first shot as you won’t have many opportunities to get the 2 Birds 1 Stone objective after this.

Be vigilant with your shots as well as accuracy plays a huge role in getting the Gold Medal as well.

After dealing with the brothers outside, make your way toward the main house.

While you may indeed go guns blazing and kick your way on the main door, it is best that you access the house from its rear doors.

There will be resistance inside the house so remember to always be in cover.

After dealing with everyone inside, make your way toward the basement. Kill the remaining brothers, while aiming for their heads.

With all of the brothers down, pick up the Jerry Can and pour fuel over the dotted trail as you move all over the house.

After making a trail of gas all the way outside the house, shoot at it to light it up.

The fire will eventually make its way to the house and set the whole house on fire.

Trevor’s competitor, the meth lab of the O’Neil’s, should explode shortly.

Move as far away from the farmhouse now using the supplied ATV you see. After that, the mission should automatically end.

Headshots: get at least 10 headshot kills. Take note that the only headshots that will count for this requirement are from the enemies you see outside the farmhouse from the vantage point.

Unmarked: complete the mission with minimal damage to your health and armor. Always be in cover and kill as many as you can from the vantage point to make the encounter much easier.

2 Birds 1 Stone: kill two enemies with one shot. Wait for the brothers to line up when they converse with one another. Line up your shot carefully.

Accuracy: finish the mission with a shooting accuracy of at least 80%. Make sure that all your shots count, especially in the sniping section.

There you have it! Follow our guide and soon enough you’d see yourself earning the Gold Medal completion for this mission!