Lamar Davis is up to no good again; and Franklin gets caught up with it…again. 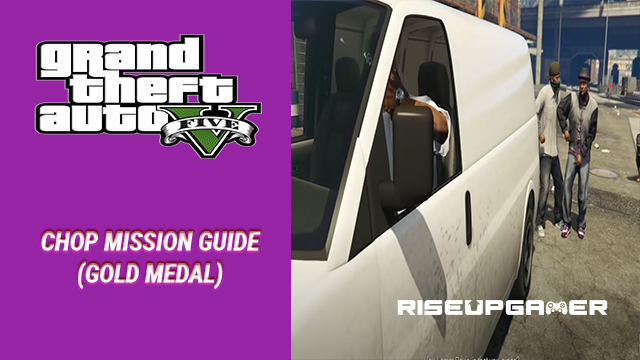 There is never a dull moment whenever Franklin’s close friend Lamar Davis is on the screen as well as his pet Rottweiler, Chop. Luckily for players, they visit Franklin often whenever they progress his part of GTA 5’s story mode.

The first mission where the vicious yet adorable Rottweiler makes an appearance in the game is in the mission titled: ‘Chop,’ where Franklin and Lamar track down ‘D’ – a rival gang member who did them wrong.

In this guide, we will be showing you how to finish the Chop mission and get its Gold Medal completion in-game.

The mission starts with a cutscene where Franklin tries to hide from his aunt in front of their house, when suddenly; the eccentric Lamar Davis comes into the picture. He has the lovable Chop beside him.

As expected, Lamar is up to no good. After convincing Franklin that he is just up to pick something up from around the corner, he suddenly drops a bomb on him – he wants Franklin to come with him and kidnap a rival gang member named ‘D.’

Franklin gets annoyed with Lamar’s plan and explains how he doesn’t want to get involved with any gang activities anymore.

Sure enough, Franklin, Lamar, and Chop bump into D unexpectedly. After a bit of confrontation, the chase begins as Lamar suddenly pulls out a gun. The mission starts.

At the start of the mission, all you have to do is to walk with Lamar and Chop toward the parked van around the corner.

Just follow the two and let the conversation play out.

Get in the van and drive it to Vinewood Boulevard. It will be highlighted on the map. Take your time listening to the conversations, watching the cutscenes, and driving for this part.

There is no time limit in this mission for you to get the Gold Completion.

As soon as the confrontation cutscene with D is done, rush back to the van and chase after him as he flees. You would have to chase him as you drive.

Make sure that you take advantage of Franklin’s special ability to slow down time while driving to close the gap on him.

This driving section plays a huge role in achieving the Gold Medal for this mission, keep that in mind.

After D gets hit by a bus, he will try to continue fleeing by foot.

Chase him to the train yard. Soon enough, D will hide on the boxcars in the yard.

The game will then prompt you to switch to Chop to find him.

Hold Chop’s perspective for at least 10 seconds and let him do his thing. Open the boxcars to find D.

After the first set of boxcars, Chop will run off somewhere. Just follow him and put a stop to his foolery.

You should then find D in one of the last sets of boxcars.

After doing so, Lamar should load him and Chop up in the van.

All you have to do now is to drive to the marked point on the map and the mission should be done.

Not a Scratch: complete the mission with minimal damage to Lamar’s van. Just make sure to use Franklin’s ability whenever you feel like you are going to crash with something as you drive fast.

Advanced Reflexes: use Franklin’s special ability for at least 7 seconds. This one goes hand in hand with the first requirement. Just use his ability as often and as effectively as you can while on the driving chase section.

There you have it! When done right, you should bag the Gold Medal completion for the Chop mission in no time!