Michael and Trevor take down a plane for Martin Medrazzo. 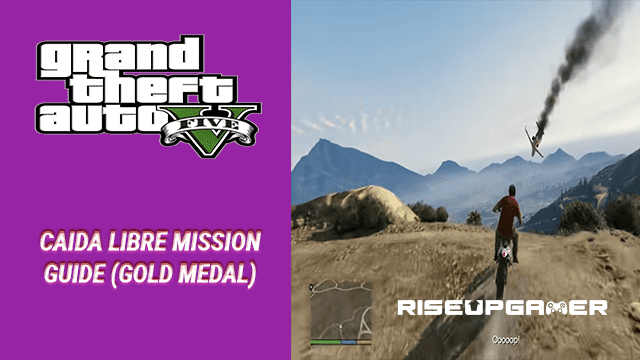 An old acquaintance of Michael’s approaches him and Trevor for some help with a delicate situation. Martin’s cousin plans on testifying against him and has some incriminating files. Martin wants the duo to kill Javier and retrieve the files.

Your aim and speed will be put to the test in this mission as you will have to shoot down a plane and chase it on a dirt bike afterwards. Here is everything you need to know about the Caida Libre mission and how to get its Gold Medal in GTA 5.

Michael and Trevor arrive at Martin’s estate and he welcomes them with open arms. He has them settle in and briefs them on what he needs them to do. Martin’s cousin, Javier Medrazzo, is planning on testifying against him and has stolen some files. Martin wants you to take Javier down and recover the files.

Michael and Trevor will split up with Michael heading to the Observatory to man the gun and Trevor preparing to retrieve the files. As Michael, head into a nearby helicopter and use that to reach the Observatory.

There will be a nearby open van with a powerful gun inside that you have to use to shoot down the plane.

Concentrate your aim at the red square in front of the plane as you will have to give you bullets a bit of a lead in order to hit the moving plane.

It will take a minimum of 3 shots to take the plane down, and doing so is also a requirement for the Gold Medal for this mission.

You will be switched to Trevor riding a dirt bike once the plane begins crashing down to the surface. This will be a long driving session. Make sure to keep on the plane’s tail. Don’t forget to not fall from the bike during the chase and to reach the dirt bike’s top speed for the Gold Medal.

Trevor will arrive at the crash site and will see Javier is still alive. You will have to kill him and collect the files from the inside of the plane.

You will then switch to Michael who has to drive away from his sniping spot and destroy the van and gun he used to shoot the plane down. You can destroy it any way you want, the easiest method is just to use explosives on the van and let it blow up into smithereens.

Instead of returning to Martin’s house, you will receive a call from Trevor telling Michael to meet up at the Stone Cement Works instead. It can be found along Senora Road. Trevor will reveal to Michael that he kidnapped Patricia after a heated exchange with Martin.

Michael is dumbfounded and can’t be bothered to argue with Trevor, the mission ends with them driving away from the Stone Cement Works.