Hijack that Humane Labs van and secure the cargo for the heist! 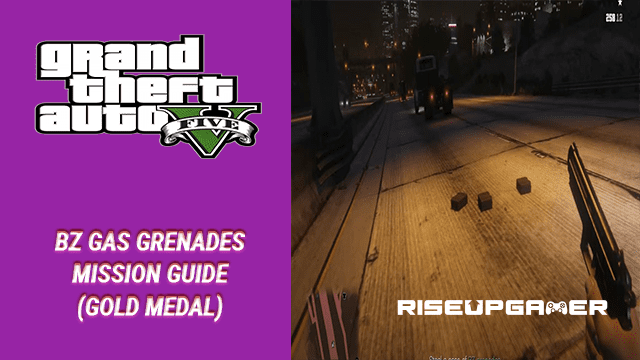 Choosing the ‘smart’ approach to the first heist mission of GTA V’s campaign should give you a couple of ‘more thought of’ missions to undertake, including the BZ Gas Grenades Mission. This mission is as straightforward as it gets, you are up to the task to hijack a van carrying a special briefcase that you would be using for the upcoming heist.

In this guide, we will be showing you how to complete the BZ Gas Grenades mission in GTA V and how to achieve Gold Medal completion.

Much like the Bugstars Equipment mission, the BZ Gas Grenades mission is a Heist Setup mission under the Smart Approach mission line that you must first tick off to proceed with the Jewel Store Heist.

This particular mission is unlocked by first completing the Casing the Jewel Store mission or the aforementioned Bugstars Equipment mission.

Soon after completing them, Lester should contact Michael about the Humane Labs vans and the items he must secure from said vans.

After this, an “H” marker should appear on your map, indicating the new mission. Approaching it should automatically start the mission.

The game will then give you two options on how you want to proceed with the quest: either you shoot the doors of the van open or destroy the van itself to secure the cargo.

To get a Gold Medal completion, go for the former. Take note that destroying the van will lock you out of the Gold Medal so just opt for shooting its doors down.

As soon as you start shooting at the rear side of the Humane Labs van, you should get a one-star wanted level.

Do your best to shoot open the rear doors of the van as fast as you can before the police get in your way and make things much harder for you.

If you want, you may also block the path of the van first using your car before you go down and start shooting at its doors.

Soon enough, the cargo should slide down from the rear of the van. Walk towards it to steal it.

Now that the job is done, lose the cops and get rid of your wanted level. This can be a bit of a challenge seeing as you are on the freeway.

After losing the cops, all you have to do now is to follow the yellow waypoint marker on your map to go to the Garment Factory, your crew’s hideout for the upcoming heist mission.

Make your way toward one of the storage rooms and drop off the package.

Michael should then give Lester a call to let him know that the job is done.

Loose Cargo: shoot open the back doors to release the cargo. Be careful not to wreck the van as this would lock you out of the Gold Medal completion.

You wouldn’t want that as escaping the cops after doing the job will be much tougher.

There you have it! Do the steps we showed above and soon enough you should get that Gold Medal for the BZ Gas Grenades mission in GTA V!